Somewhere deep down we always knew Elton John was a gleek and now we have proof that John loves him some Glee. 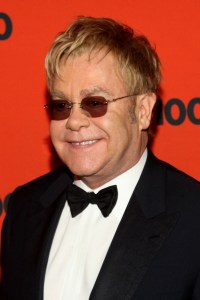 Elton John, the 63-year-old musical icon, is an admitted fan of Glee and it looks like Elton John will be teaming up with its star, Matthew Morrison. The two are allegedly partnering for Morrison’s upcoming debut album. “I am supposed to be doing something with Matthew Morrison for his album,” John told Entertainment Weekly. “We had a little meeting together, so hopefully that’s going to happen when I get to L.A.”

Months ago, the Glee gossip patrollers buzzed with delight over Elton John’s willingness to lend his songbook to Glee and it looks like he’s still willing. “Of course I’d be into that. It’s always great when someone covers your songs, no matter how good or bad the version is,” John told Entertainment Weekly.

Elton John might be an admitted gleek, but there’s also a little monster in the singer. John revealed the possibility of another collaboration. Is a duet with Lady Gaga in the works? “There’s a chance I might do one track with her on her upcoming album, but she’s so busy and I’m so busy, we can never get together!” he said.

Elton John? and Lady Gaga played dueling pianos during a mashed-up version of Speechless and Your Song to rave reviews at the 2010 Grammy Awards.

Are you excited about a Matthew Morrison and Elton John project or would you rather see the monster in Elton John with a Lady Gaga? track? We’d like to know. Personally, both sound pretty fierce!