The new Miley Cyrus video has many saying the teen has finally gone too far.

Miley Cyrus is only 17 years old, but her new video for Who Owns My Heart is more reminiscent of the naughty club scene in Basic Instinct than a high school prom. 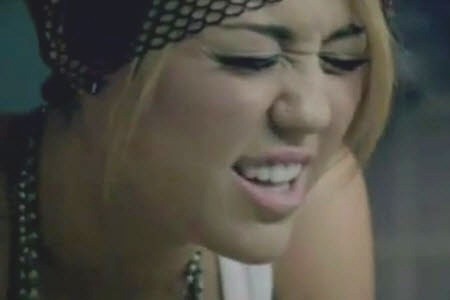 The song features Miley — autotuned to within an inch of her life yet still managing to sound like a hillbilly — blindfolded in bed, walking around in her panties, writhing around on a pool table, and partying in a club (underage, natch) while freaking to some hot girl-on-girl action.

“It’s just about freeing yourself from anything you think is holding you back,” the singer told MTV about her new album. So far Miley has freed herself from clothes, dignity and self-respect.

Miley’s video for Can’t Be Tamed was equally as scandalous — she played a stripper in a natural history museum.