Gwyneth Paltrow says the Hollywood casting couch is real — but she declined a seat on it. 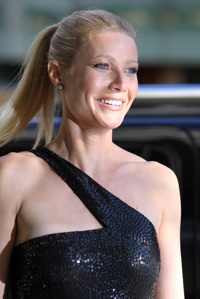 Gwyneth Paltrow has played many roles, but one she turned down was on the infamous Hollywood casting couch.

“When I started out, someone suggested that we finish a meeting in the bedroom,” said Paltrow, now 38. “I left. I was pretty shocked. I could see how someone who didn’t know better might worry, ‘My career will be ruined if I don’t give this guy a blow job!'”

Of course, Paltrow was already Hollywood royalty — mom is acclaimed actress Blythe Danner and dad was director Bruce Paltrow. She went on to win an Oscar for her performance in the flick Shakespeare in Love.

So, what’s next for the busy wife-career woman-mom of two? She’s not sure, because good roles are few and far between for women her age.

“There’s a lot [of roles that are] okay, but there’s little that’s really good, especially for someone my age,” Paltrow said. “Sometimes you find out that something you really liked is going to someone 10 years younger.”

Look for Gwyneth Paltrow next in Country Strong, to be released later this year.