Katherine Heigl is trying to figure out how to fix her image problem. 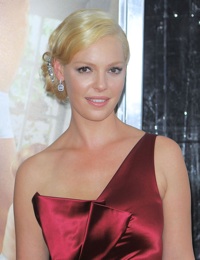 We love a woman who has no fear of speaking her mind, and actress Katherine Heigl is certainly that kind of woman. What the public most certainly does not love is a celebrity appearing ungrateful for her success, and Katherine Heigl has unfortunately cultivated that very image.

Heigl, currently appearing in the rom-com Life As We Know It with hottie Josh Duhamel, has called out at least two of her biggest breaks in a very unflattering light. She bowed out of the Emmys race several years ago calling the Grey’s Anatomy writing inadequate, then gave an interview detailing how her breakout role in Jude Apatow’s Knocked Up was “sexist.”

About her bad reputation, Heigl said, “It’s something I’ve spent a lot of time in the last year or so really thinking about or really trying to figure out, because, obviously, my career is important to me, and I’m really passionate about trying to keep it.”

“I’ve spent a lot of time trying to figure out where I kind of went off-track and how and why and what I can do in the future to avoid that,” she said. “I don’t want to be the person digging my own grave.”

It might be too late for that — her last two films, Killers and The Ugly Truth, did poorly at the box office. Heigl, who once had a shot at being the next America’s sweetheart of Meg Ryan proportions, is definitely not a crowd favorite.

How can she turn her bad rep around? She has a plan of sorts.

“I’ll say what I gotta say and be honest,” Heigl told LA’s KTLA morning show. “But maybe not so edgy.”

read on for more katherine heigl