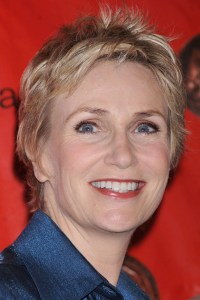 Lynch, who never fails to get huge laughs in movies such as 40 Year Old Virgin, Talladega Nights and Best in Show, promises to deliver an awesome show — full of Glee skits, I’m sure.

First there was the Facebook fan page to get Betty White to host SNL, now Jane Lynch’s fan page and — voila! — she’s hosting. Although I’m sure they would have picked the Emmy-winning Gleek with or without Facebook.

Judging by her promos (check her out below) we think she’ll do great! Saturday Night Live with Jane Lynch and musical guest Bruno Mars (who, by the way, was recently arrested for cocaine possession) will air October 9 at 11:30 p.m. on NBC.