The first season of The Real Housewives of D.C. came to a close last night and many were still left with burning questions about what really went down the night Michaele and Tareq Salahi supposedly crashed the White House State Dinner.

I think subconsciously we all knew we wouldn’t get all the answers from the alleged White House crashers, Michaele and Tareq Salahi, and we were in a way right. 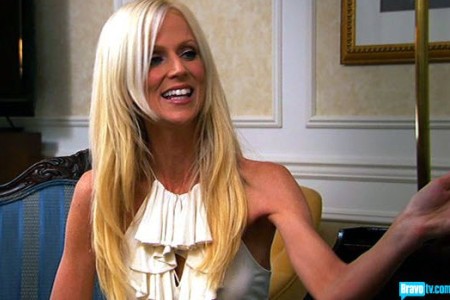 After last night’s finale of The Real Housewives of D.C. things were still a tad blurry. Did the Salahis really crash President Obama’s State Dinner back in November of 2009? Check out what Bravo’s cameras did catch and decide for yourself.

As the episode opened with the Salahi’s limo approaching Pennsylvania Avenue there was tension, but it wasn’t really because of the event. The couple just looked awkward.

The Real Housewives of D.C. cameras captured the couple at the first security checkpoint where they, lo and behold, gave their real names — make that clue number one. The guard did say she didn’t see them on the list, but had them go stand to the side until they could figure things out.

That was it for checkpoint one and I guess our only clue because that’s all folks. A news package of the couple from days after started running for the viewers.

This time, however, we got to see the other housewives’ reactions to the news coverage.

Let the Salahi-bashing begin. The ladies of Capitol Hill gathered to discuss the events and had some drinks while watching the Congressional hearing in which the Salahis used their right to silence. Their lips were sealed.

The best quote of the night came from Cat with her opinion of the couple: “They are so plastic, not fantastic.”

Cat got the bad end of the stick when she and her husband Charles were uninvited to the White House Christmas Party because of her association with the Salahis. On a side note, we’ve also learned in recent days that she and Charles are divorcing.

Cat’s pretty spicy and she didn’t hold back when Stacie and Jason tried to have the Salahis over for dinner in hopes of finding out what happened.

Mary and Lynda did not attend out of hate for the couple. It was Stacie, Jason and Cat who came face-to-face with the Salahis.

Cat looked grumpy from the get-go. She couldn’t stand the small talk and aggressively confronted the elephant in the room. With a lot of vulgar name-calling and finger-pointing, Cat made a dramatic exit from the house.

After Cat left, Stacie and Jason tried to get more answers about what went down at the State Dinner, but the Salahis denied access about the night. Michaele reminded Stacie and Jason that their “real” friends don’t ask about it.

Tareq shot back that there was “no shame” in the incident and offered nothing. For the final ending, the Salahis snuck out the back door with no proper goodbye. Michaele’s final words to the camera were so redundant: “Someday, I’ll have a chance to talk about it all.”

They’ve been saying the truth would come out for months. We’re still waiting, because that episode offered nothing but a few names, a checkpoint officer and a silent hearing!

I like to believe this was just blown out of proportion. How could anyone be that crazy to crash the White House? But then again, the footage and the pleading of the fifth puts me on the fence. The final credits did roll reminding viewers that the couple has never been criminally charged, but the case remains open.

What did you think of the hoopla? Are you doing some Salahi-slamming of your own or do you believe the couple? We want to know.

Read on for more Michaele Salahi & tHE Real Housewives of D.C.