When Robert De Niro and Edward Norton are attached to a project, audiences can be safe in assuming that the acting will be off-the-charts. De Niro and Norton are on either side of the law in Stone and both are brilliant.

Unfortunately, De Niro and Norton, and also the stellar Milla Jovovich, suffer from a story that is simply not all that endearing. Stone doesn’t try to be a pull-up-a-blanket-and-watch-it film. It is disturbing in its ability to have the viewer question which side is right and which is playing it wrong. Many films can pull this feat off in spades. Stone is not one of them. 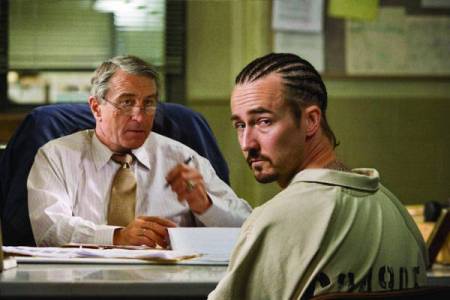 At the opening of Stone, the viewer has the illusion that in the midst of all this crime repentance, there was a moral compass worthy of following. Unfortunately, through means necessary to move Stone’s plot along, the only character with a moral compass of any kind in Stone — De Niro — veers off course and then so does the movie.

The who’s playing who methodology of storytelling is a classic screenwriting device, but in Stone, its references to a higher power and an obsession with sound leaves the film wandering for its own compass.

Stone does stick with you. How could it not? All the actors excel, especially Norton in his Primal Fear best as a prisoner in lockdown who audiences just cannot figure out.

What is impressive about Stone is its ability to capture time. The progression of De Niro’s onscreen marriage is handled with unforeseen grace as is Norton’s character’s journey from crime to comeuppance.

In the midst of Stone, Norton’s Stone arrives at a religious determination that immediately overtakes the film — not in a good way like so many films have in embracing religion as a supporting role in someone’s redemption, like in Dead Man Walking. In Stone, the myriad of mazes that Stone walks through to gain his freedom are marred in the grayness of his connection to self-responsibility.

Norton and De Niro could read a phone book and we’d show up. But, in Stone, their stellar performances do not make the sum greater than the whole.