Secretariat, the movie, flirts with greatness, although Secretariat, the horse, is considered by ESPN to be one of the top 100 athletes of the 20th century. The racehorse is the only non-human on the list!

It’s hard to believe this inspirational tale hasn’t made it to the big screen before since Secretariat became a sensation in 1973. Secretariat was a once-in-a-generation moment, thus explains why it would make a great cinematic moment as well. 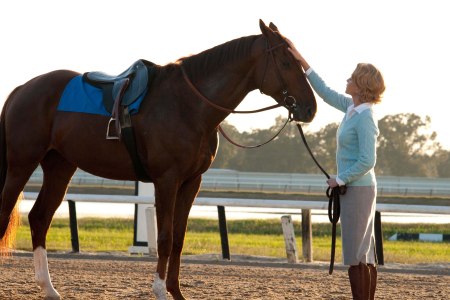 So, the question begs: Is director Randall Wallace’s Secretariat worth the wait? The director of The Man in the Iron Mask and We Were Soldiers, is also the screenwriter of Braveheart and Pearl Harbor, and certainly knows how to paint with scope. The breadth of the Secretariat story is wide and impossible to completely capture onscreen. With what Wallace and his cast have been given, they deliver.

What meddles down the film Secretariat are elongated stretches of slightly misguided familial backstory.

Secretariat begins with the always astounding Diane Lane learning that her father has fallen ill and she must hurry to the family ranch and manage the family’s affairs. Lane’s Penny Chenery Tweedy leaves her family’s Colorado home and begins a journey that would lead her family to the winner’s circle of horse racing’s Triple Crown.

This is where much of the cast makes its presence felt. The story, at times, feels cumbersome. But, Secretariat is helped by standout performances from actors such as Lane, John Malkovich as Secretariat’s reluctant trainer, James Cromwell as a rival horse stable owner, Kevin Connolly as the journalist who would document history and former Tennessee Senator Fred Thompson rejoining the acting world with his turn as a horse aficionado, who gives Lane’s Tweedy some much-needed professional support.

Part of the joy of Secretariat are the scenes leading up to the 1973 Triple Crown from the horse’s perspective, how Secretariat came to be in Tweedy’s family horse stables to how Lane’s character managed to convince Malkovich’s trainer that it was time to return to what he does best — creating racing winners.

We would be completely remiss to not mention the exquisite racing scenes captured by Oscar-winning cinematographer Dean Selmer. The Kentucky Derby and Belmont Stakes races are pure movie magic. However, by witnessing the middle race (the Preakness) from the family’s perspective, this reviewer — spoiled by the cinematic majesty of Wallace’s capturing of the 1973 Kentucky Derby — missed seeing the horses do what they do best. Instead, the audience witnesses the second part of the Triple Crown in a Colorado home that frankly isn’t nearly as exciting.

Secretariat does pull off an amazing feat. The fact that the audience knows how the film ends and still is drawn into the three corners of horse racing’s Triple Crown is astounding. When the final race comes upon us, nothing can prepare you for the thrill of the moment in Secretariat. It ranks up there with when the USA beat Russia in the movie Miracle or when Dennis Quaid walked onto the field and pitched for the Tampa Bay Devil Rays in The Rookie. Gee, what do both have in common? Those responsible for those indelible movie moments are the same creative team that is behind Secretariat.

Read on for more Secretariat