Nothing is holding Sandra Bullock down lately — not even Gravity. 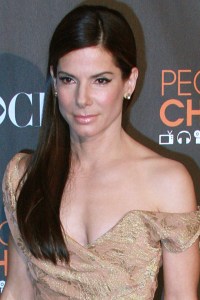 Bullock has had a well-documented roller coaster of a year that truly began in 2009. Sure, she began 2010 by picking up her first Oscar, but soon her personal life plummeted to unimaginable lows when Bullock’s husband Jesse James was revealed to be a philandering knave.

It appears that Bullock was another victim of The Curse of Oscar and would follow in Halle Berry, Reese Witherspoon and Kate Winslet’s footsteps by divorcing her husband right after she won the top prize.

Now, those bumps are all behind her and Bullock is getting back to work and is currently in talks to head up Alfonso Cuaron’s new film, Gravity. Other big names previously linked to the role include Angelina Jolie, Scarlett Johansson, Natalie Portman and Blake Lively, who may seem out of place in such A-List company but whose career is blossoming way beyond Gossip Girl thanks to leading roles in The Town and 2011’s Green Hornet.

Bullock is the latest star (and reportedly the closest to finalizing negotiations) connected to the role where she would play the sole survivor of a disastrous space mission struggling to get home to her daughter. Robert Downey Jr. is attached to star in the 3-D sci-fi thriller.

Director Cuaron, whose previous fare ranges from Harry Potter and the Prisoner of Azkaban to Children of Men, wrote the film’s script with his son, Jonas.

If Bullock signs on, Gravity would be her first film since winning the Best Actress Oscar for The Blind Side. We assume she’s moving slowly picking her next role because even though everyone is pulling for her, the next film she selects will be closely watched to see if it’s both a hit, a la The Proposal and The Blind Side, and a role that proves her Oscar win wasn’t a fluke.