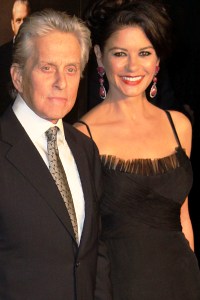 “He has his last treatment today, and they certainly haven’t scheduled anymore,” Douglas’ friend and publicist Allen Burry told E! News. According to Burry, the prognosis looks good for Michael, an Oscar winner and star of Wall Street 2: Money Never Sleeps, who announced in August that he’d been diagnosed with an advanced form of the disease which is diagnosed in approximately 36,000 Americans per year.

Douglas recently put on a brave face, walking the red carpet of Wall Street 2’s premiere and sitting down with David Letterman to candidly discuss his battle, but according to reports he’s had extreme difficulty swallowing, refusing to eat via the feeding tube doctors offered, and will reportedly spend the next six weeks recuperating from treatment.

Paparazzi shots taken of Douglas as he walked his daughter to school on Tuesday showed the actor looking thinner than usual and a little worn down. That is not surprising considering what he’s going through.

Both his wife, Catherine Zeta-Jones, and his publicist insist, “He’s doing really well,” and doctors have given Douglas an 80-percent chance of survival and are both optimistic and pleased with how the 66-year-old has responded to treatment.

We wish him a speedy and complete recovery.

Read on for more Michael Douglas