A woman claiming to have had an affair with Ashton Kutcher says the star told her he and Demi Moore have an open marriage. 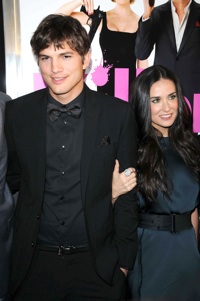 Brittney Jones says she gave it up to Ashton Kutcher on a couch in the LA home he shares with wife Demi Moore after meeting in a bowling alley. But she says if Demi is going to be mad about anything, it is only that she didn’t get in on the act.

“Ashton said he and Demi have an open relationship and have threesomes often,” Jones claims. “I didn’t feel at all like he had just cheated on his wife. It felt normal and OK. He (Ashton) said they share women, but he isn’t supposed to go off and sleep with women on his own. He explained that he and Demi had a deal where they had to share lovers. He felt bad that he had been with me and didn’t share.”

This may explain why Demi is constantly posting cougarific bikini pictures of herself on Twitter — could she be trolling for hookups?

So far Demi and Ashton have not addressed the swinging rumors, but are suing Star Magazine for publishing the cheating story.