Chelsea Handler took to her Twitter to respond to rumors that she and rapper 50 Cent are a couple. Is this canoodling couple for real? 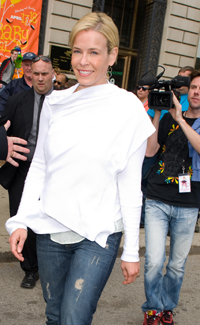 There was no denying the chemistry between rapper 50 Cent and Chelsea Handler, as they openly flirted during his appearance on her show, Chelsea Lately, last year.

In fact, the rapper even tweeted his affection for the Chelsea Lately talk show host. “A y’all know I love me some Chelsea Handler. Y’all see her show tonight she is so funny to me.”

In case you were wondering, I translate that to read, “I love Chelsea.”

Then, there were reports that Handler and 50 Cent were spotted canoodling at a New Orleans bar. Check out the photo here and decide for yourself.

Today, Handler took to Twitter to address the rumors. “Everyone, calm down. I met with Mr. Cent about a potential project. There’s nothing to report yet. I’ll let you know if there is.”

In case you were wondering, I translate that to mean, “I like 50 Cent, but am not quite ready to spill the beans publicly yet.”

This could be fun rebound romance for Handler, who has been linked with Animal Planet’s Dave Salmoni. She split with her boyfriend-boss, Comcast CEO Ted Harbert last year.
What could this “potential project” be? 50 Cent has expanded his career from rapping to acting — to even creating a billion (yes, billion!) dollar drink, Vitamin Water. We know Chelsea is a fan of vodka — possibly a vodka water hybrid drink? Nothing like chugging vodka after a workout to keep you hydrated…and buzzed.

What do you think? Is there a 50 Cent/Chelsea Handler project — or is she trying to cover up their romance?