Toni Braxton is singing a familiar tune as she has declared bankruptcy — again. Braxton, the Dancing With the Stars veteran, is broke. 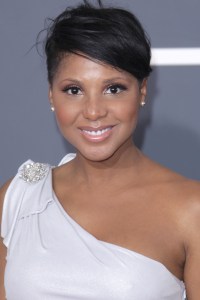 Toni Braxton has let her financial troubles get the best of her once more. The 43-year-old singer has filed for Chapter 7 bankruptcy for a second time, claiming she’s responsible for an estimated $10 to $50 million in unpaid bills.

AT&T, The Four Seasons Hotels, Tiffany & Co., Orkin Pest Control, the Internal Revenue Service and Mesa Air Conditioning, oh my. According to TMZ, the singer listed the odd mix of businesses as her debt collectors.

Not sure how Braxton feels about being indebted to the DMV in California and Nevada but apparently she is in debt to them too. Braxton also claims she could possibly owe money to the City of L.A. Parking Violations Bureau. Possibly? Either you do or you don’t. Those must have been some hefty parking tickets.

Toni Braxton is worth somewhere between $1 and $10 million, leaving her unable to pay the costs of her debt. This is not Toni Braxton’s first time in bankruptcy-land. She also filed for bankruptcy in 1998. In March, the financially-tapped star was hit with a $400,000 federal tax lien.