The cast of Glee is adding one more notch to their star meter by taking on the legendary Beatles. The musical kids of Glee have leaped over the Beatles on the Billboard Hot 100 chart.

The Glee kids have managed to do the unthinkable in surpassing the Beatles on the Billboard Hot 100 chart. The cast of Ryan Murphy’s mega-hit is standing as one for the most appearances by a non-solo act. 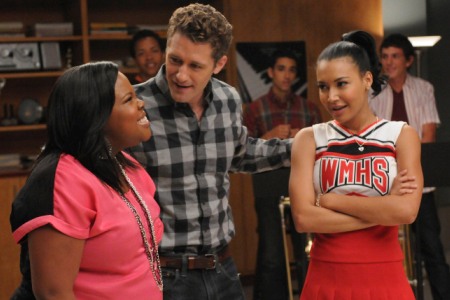 This week Glee has six debuts on the Billboard Hot 100 chart, giving the musical wonderment 75 songs on the chart compared to the Beatles’ 71, the previous record.

Glee’s Britney Spears episode likely has something to do with the boost in soundtrack sales. Glee’s cover of Spears’ Toxic will reportedly arrive as the Billboard Hot 100’s biggest debut, according to the website. Glee’s version sold 109,000 downloads in its first week of being available, according to Nielsen SoundScan. The song will chart on the Digital Songs survey at number nine.

If you’re keeping tally (and who isn’t?), Elvis Presley is still King with 108 songs on the Billboard Hot 100 chart, with James Brown dancing into second with 91. Glee, of course, leaped over the Fab Four into third with 75. Not bad for a little engine that could series about high school glee club, right?

If you’re still wondering who’s holding down the rest of the top ten spots, Ray Charles is sitting pretty at fourth with Aretha Franklin claiming fifth. The Beatles fell to a respectable sixth with Elton John, Lil Wayne, Stevie Wonder and Jay-Z managing to round out the top ten.

According to Nielsen SoundScan, the cast of Glee has sold 2.8 million albums and 11.5 million downloads. Now that’s something to sing about.

Are you downloading, purchasing or just plain rocking out to Glee tunes? It’s okay, this is a judge-free zone, gleeks. We want to know.