An earthquake rocks the Modern Family clan as Broadway star Nathan Lane adds some spice to the ABC hit as Mitchell and Cameron’s pal, Pepper.

“There’s an earthquake in Los Angeles and everyone approaches it in their own way,” Modern Family star Sofia Vergara (Gloria) previewed for SheKnows. “It’s really funny. You can imagine, Gloria thinks this is a punishment from God. She’s trying to get everybody to church.” 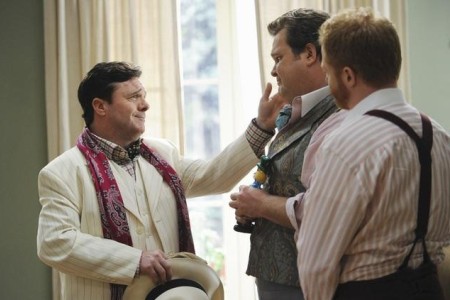 Her son Manny (Rico Rodriguez) has his own existential crisis while out with Jay (Ed O’Neill), who had declared he’s done with church at a most inopportune time.

Over at the Modern Family Dunphy house, Claire (Julie Bowen) is left stuck in the bathroom with the plumber (Vic Polizos), but it’s not as bad as it sounds. After a morning of bickering with her girls, she finds a surprising confidant in the handyman.

Phil, meanwhile, makes the most of his wife’s confinement. “Phil didn’t do something to earthquake proof the house that he promised he had, so I spend most of the episode trying to cover up,” Ty Burrell told SheKnows.

Mitchell and Cam (Jesse Tyler Ferguson, Eric Stonestreet) use the earthquake as an excuse to get out of their friend Pepper’s “Oscar Wilde and Crazy” themed brunch.

When Pepper shows up to “help” them deal with the alleged earthquake damage, Cam decides to come clean. Needless to say, drama queen Pepper does not take it well when he learns they didn’t want to come to his soiree to begin with!