As Joan Holloway on Mad Men, Christina Hendricks continues to turn Roger Sterling’s head and incite inappropriate comments from the rest of the office in her 1960s getups. Soon, Hendricks will be making a splash as herself on the cover of the November issue of Harper’s Bazaar, where she reveals a few things about herself, including how women have taken a shine to her almost as much as men. 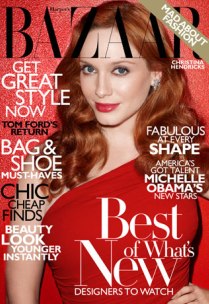 Understandably, the appeal of Christina Hendricks‘ sultry curves is not gender specific, as she tells Harper’s Bazaar: “Women hit on me. My husband thinks it’s so odd that so many women hit on me.”

Hendricks goes on to say she wasn’t aware of the affect her body would have on the audience. “When the attention started to become about my figure, I was surprised, because it wasn’t something I was focused on. And then it became very positive, and people were saying very nice things.”

Many of those nice comments come from Mad Men fans, as the actress recalls a specific interaction with a fan who approached her and said, “Excuse me, I just want to tell you that I watch your show, and you make me feel better about myself. I am a curvy woman and you’ve made me feel sexy and beautiful.” Christina Hendricks said the comment made her “teary-eyed.”

The article will also include a photo spread of the self-proclaimed “girly girl” who dons several tailored suits, which, as Christina Hendricks muses in a video of the photo shoot (below), are just modern day versions of her character, Joan.

Are you one of the many who has fallen under Christina Hendricks and Joan Holloway’s spell? If so, check out the new issue of Harper’s Bazaar on stands October 26.