Lindsay Lohan will hopefully get the help she needs this time, as she has no court-ordered time limit set for rehab at the Betty Ford Clinic. Lohan can stay as long as she needs, which we hope, is quite a while. 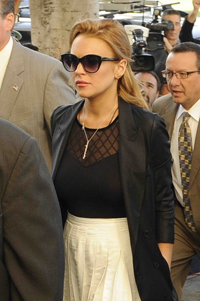 Lindsay Lohan will remain in rehab at least until her October 22 court appearance, reported TMZ. Judge Elden Fox will then evaluate her progress at Betty Ford and decide if she will go to jail or rehab.

Her battle with addiction

After serving time in jail for her 2007 arrest of drunken driving and cocaine possession, Lohan spent two weeks in jail, followed by several weeks in a rehab facility. She was then ordered to undergo drug tests and subsequently tested positive for cocaine.
After the news was made public, she took to Twitter. “Regrettably, I did in fact fail my most recent drug test and if I am asked, I am prepared to appear before judge Fox next week as a result. Substance abuse is a disease, which unfortunately doesn’t go away over night. I am working hard to overcome it and am taking positive steps…forward every day,” Lohan said.

“I am testing every single day and doing what I must do to prevent any mishaps in the future. This was certainly a setback for me but I am taking responsibility for my actions and I’m prepared to face the consequences.”

Her October 22 court appearance will be D-Day for Lindsay, as Judge Fox decides if Lohan should return to jail or if it would be more appropriate to send Lohan back to a rehab facility.

For the time being, Lohan is getting treatment at the famous Betty Ford treatment center, a place where her own father, Michael Lohan, went to get treatment for his own addictions. “Now that word is out. Look at the ‘short’ list of people who went to Betty Ford,” Michael Lohan told Access Hollywood. “Most if not all relapsed. I went there myself and I will tell you. Betty Ford is a country club.”

48 mins ago
by Maggie Clancy