James Franco likes to keep us guessing whether it’s his performances in Eat Pray Love, Howl or his latest, 127 Hours. Franco’s latest antic is posing on the cover of Candy magazine in full drag — red lipstick, blue eye shadow and gold choker included. 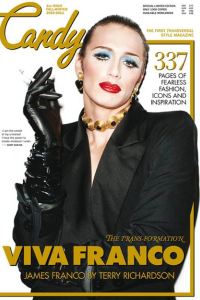 We thought the Oscar-nominated actor was a little crazy making a jump back to soaps with his appearance on General Hospital, but James Franco’s recent appearance in drag on the cover of Candy magazine has us scratching our heads.

Franco, who is heterosexual, has been open to the fact that he doesn’t like to be stereotyped, and recently told The Advocate that he is interested in pushing the envelope.

“Everyone thinks I’m a stoner, and some people think I’m gay because I’ve played these gay roles. That’s what people think, but it’s not true. I don’t smoke pot. I’m not gay. But on another level, there’s something in me that is able to play roles like that in a way that’s convincing.”

Candy, which is the first “transversal style magazine,” shows Franco looking almost like one of Robert Palmer’s Simply Irresistible music video dancers, with his slicked back hair and red lipstick. This seems to be another platform for the 32-year-old actor to show he lives life without boundaries — or it is just a ploy to drum up attention for his new movie, 127 Hours. Either way, we are talking about him.
From playing Harvey Milk’s lover in Milk to portraying the gay activist and poet Allen Ginsberg in Howl, what draws Franco to playing these roles? “In this history of cinema, there are so many heterosexual love stories,” he said. “It’s so hammered, so done. It’s just not that interesting to me. It’s more interesting to me to play roles and relationships that haven’t been portrayed as often.”

Kudos to Franco for pushing the envelope and keeping us guessing.

Tell us: What do you think of Franco’s Candy magazine cover?