For Kevin Connolly, taking the part in Secretariat was a no-brainer. As a lifelong horse racing fan, Connolly was intimately aware of the legend of Secretariat.

In Secretariat, Connolly portrays Bill Nack, the real-life journalist with a front row seat to the Secretariat sensation in 1973. It is Nack’s book that the film Secretariat is based on and thus, Connolly admitted it added that much more fervor to his desire to tackle the role. 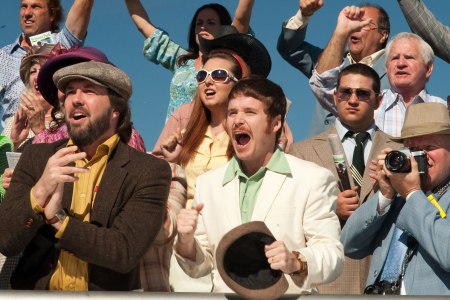 Connolly talked with us exclusively at the Santa Anita Racetrack recently for his take on the Secretariat phenomenon and what it took to bring the inspirational story to life starring Diane Lane. As a child, Connolly was a frequent visitor to the Belmont Park Racetrack in New York City, and channeled that childhood passion for horse racing into a stellar performance in a role that could easily be forgettable in some other actor’s hands.

Kevin Connolly is also closing out his run as Eric on the wildly popular HBO series Entourage this year and if he keeps choosing roles like his in Secretariat and the recent He’s Just Not That Into You, his move from the small screen to the big screen should be effortless.