There’s no stopping the CW hit The Vampire Diaries and from the looks of it, this week’s episode called Kill or Be Killed clearly keeps the heat coming.

After last week’s episode of The Vampire Diaries, things are certainly going to get scorching in Mystic Falls. Damon (Ian Somerhalder) managed to make an enemy of the most dangerous kind out of Mason after trying to kill him, while Stefan and Elena staged a dramatic breakup to throw Katherine off of her diabolic game plan. 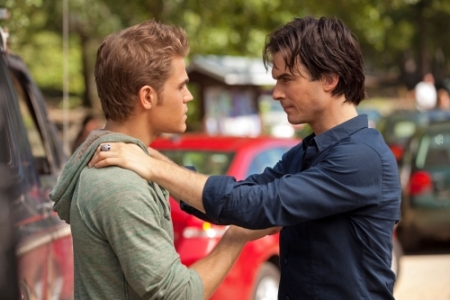 This week’s episode entitled, Kill or Be Killed, promises secrets will be revealed. Sounds juicy, doesn’t it?

The fifth episode in the second season of The Vampire Diaries is set to pit Stefan (Paul Wesley) and Damon at odds over how to neutralize the Lockwoods, while Tyler (Michael Trevino) digs deeper into his family’s curse and learns a bit more about his Uncle Mason (Taylor Kinney).

Kill or Be Killed will also feature more Jeremy (Steven R. McQueen) screen time as he finds himself drawn into the Lockwood family mystery despite Elena’s (Nina Dobrev) objections.

Sheriff Forbes will also play a key role in the episode as she acts on shocking information filtered from Mason, leading to a night of tragedy. Could this chain of events be the big reveal that her daughter Caroline is a cold-blooded killer? Check out the preview of Kill or Be Killed and decide for yourself.

Teen Choice Award winner The Vampire Diaries takes a bite out of Thursday nights at 8 p.m. on the CW. Let the feeding frenzy begin!

Read on for more Vampire Diaries