Alyson Michalka and Hellcats are causing quite a stir. Michalka anchors the CW’s new drama that simultaneously speaks to our times and delivers pure unadulterated entertainment each Wednesday night. 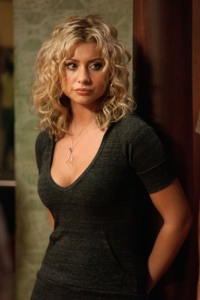 Sure, Hellcats is about a cheerleading squad. But that is where the correlation between the Bring it On movies begins and ends. Michalka plays a pre-law student whose financial aid has run dry at the same time a spot on the university’s cheerleading squad opens up.

Hellcats’ season premiere scored the highest ratings the CW has seen since Gossip Girl debuted in 2007. Amidst the Hellcats debut and Michalka’s performance in another fall hit, Emma Stone’s movie hit Easy A, the actress is having a sensational season.

To Hell and back

SheKnows: So how are things going on the Hellcats set?

Alyson Michalka: We’re having so much fun. I have to say, we all get along so well as a cast. We really enjoy each other’s company. This is quite an adventure for all of us.

SheKnows: What first appealed to you about the show Hellcats that you had to be a part of it?

Alyson Michalka: I loved that the show showed a lot of heart. It’s one of those shows that really kind of puts a focus on not only the competitive aspect of the cheerleading world, but it really opens up this world to be able to know these characters and feel for them on a very personal level. I love that about the show. I love that our writers and creator have been able to tap into each character and focus on those things.

SheKnows: Although the show goes way beyond cheerleading, I do have to ask about the cheerleading community and how it has responded en force to Hellcats. What have you made of their reaction? 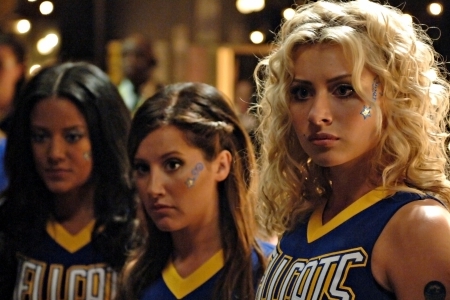 Alyson Michalka: I definitely feel that everybody is supportive of the show. We were always cautious with the show because we knew cheerleaders would be watching the show. We better step it up because they’re going to be our toughest critics. For us to have a great response from them, means so much to us as a cast. We’re obviously not real cheerleaders, we’re trying to tap into that world and be as realistic as we can. We have an amazing squad and we have great doubles. The fact that real cheerleaders are able to relate to our show and know that we’re trying to portray their world as much as we can, means a lot to us. That’s what I’ve been focused on every day.

SheKnows: What has been the most challenging aspect for you for this role? Has it been learning the cheerleading moves?

Alyson Michalka: The biggest hurdle is the hours. I’m working the longest hours when it comes to filming. It takes a lot out of you at the end of the day. You’re pretty exhausted and not a lot of time to yourself. That’s something I’m learning how to adjust to, I’m really able to use my time wisely and re-charge.

SheKnows: The storyline is very timely, with your character running out of financial aid. How do you think it is resonant to college kids today? 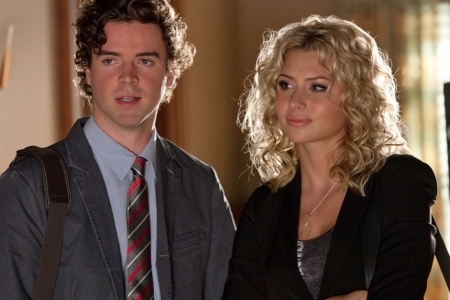 Alyson Michalka: People can relate to it a lot. These are tough times for everyone right now in our country. There’s a lot to do with the constant struggle we have as people and life in general, the ups and downs we go through. I feel that people know what it’s like to balance your life and juggle your personal life with your career, with your school studies — whatever it may be. I love that our show is realistic in that sense. 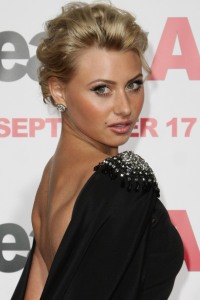 SheKnows: Did you have any cheerleading experience in your background? Maybe even being a part of a dance troupe?

Alyson Michalka: When it comes to cheerleading, it’s totally new to me. That’s something I was excited to take on as a challenge. But when it comes to my dance background, I was on a competitive hip-hop squad when I was a teenager so I definitely can relate to that aspect and the fact that it is a big commitment to take on as a squad. To be really committed to your fellow dancers, I understand that.

SheKnows: You had a film open recently that we absolutely adored, Easy A…

Alyson Michalka: I’m so happy you liked it. I loved that movie, I loved making that movie. I’m so happy that people have received it so well, I’m thrilled.

SheKnows: It’s another story that is really relatable and it’s unlike any other high school-based movie out there, what did you like about Easy A?

Alyson Michalka: I loved that Easy A was funny and had a great storyline when it comes to the characters you meet. I was so happy to be a part of it because my character was such a fun character and something that was so new to me. It was a fantastic movie to be a part of and Emma (Stone) was such a great person to work with. I loved that the movie is kind of a tongue-in-cheek look at the rumor aspect of high school. It’s in a way that it sucks to have rumors about you and sometimes those things can really hurt someone. I wanted to be a part of something that was fun, but also had some heart.

Read on for more Hellcats

Miss the premiere? The Hellcats premiere recap
Alyson Michalka and Hellcats: An inside look
Photos from Hellcats