Are Chelsea Handler and 50 Cent dating? Sure looks like it, according to photos!

Looks like Chelsea Handler likes herself some Sexual Chocolate. The funny lady was caught by sneaky photogs while on a date with 50 Cent at the Blue Nile Jazz Bar in New Orleans. A source says Fiddy is Chelsea’s regular booty call. “It’s been going on awhile,” the source says of the pair, both 35. “It’s more of a hookup thing — whenever they are in the same town.” 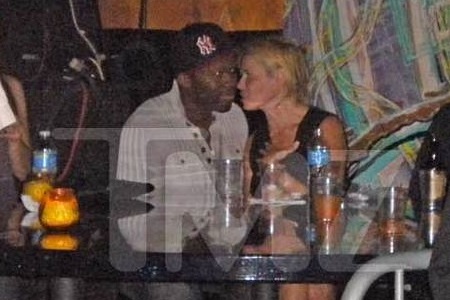 This little tryst might explain why Chelsea’s blog has gone dark for the week. In an entry dated October 4, she stated, “I’ll be taking this week off from the blog. You need to know what it’s like to not hear from me for a while so that you can learn to appreciate me. It’s a strategy often used in relationships, and one that often backfires. You think to yourself, ‘I won’t return calls for a couple of days. I’ll say I have plans; that will make him miss me.’ Then next thing you know he’s knee deep in a buffet at a strip club at 3 in the afternoon realizing s–t is a lot more fun when you aren’t breathing down his neck. Just to be sure that doesn’t happen to my relationship with my daily readers, you can still follow me on Twitter.”

However, her Twitter hasn’t been updated since she linked to that blog entry. Must be busy on something… like 50 Cent’s lap.

Could this be why Chelsea’s burgeoning relationship with Animal Planet hottie Dave Salmoni is fading? And don’t forget that last year Chelsea dumped her boss, Comcast CEO Ted Harbert. Girlfriend gets around. Fiddy was seen doing the walk of shame out of Ciara’s apartment as recently as August.