Glee got into an Empire State of Mind courtesy of Jay-Z and went Toxic with Britney Spears for the first two episodes of the sophomore season. The Glee gang of New Directions dug down deep to show a little faith in a religion-themed episode three that had us believing.

With the timely subject matter of tolerance and beliefs echoing in our ears due to the rise in bullying cases, this week’s episode came at a poignant time. 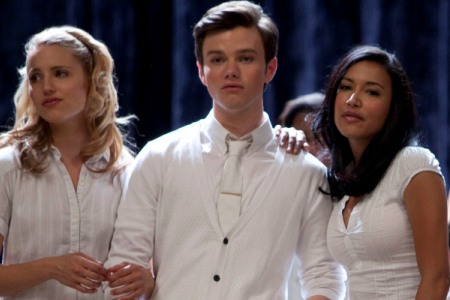 The episode entitled, Grilled Cheesus, featured an internal tug-of-war over values and beliefs, more specifically, those belonging to the character of Kurt Hummel (Chris Colfer). What brought on this heavenly chain of events?

Finn somehow managed to George Foreman the face of God into his grilled cheese and tried to make believers out of the glee club by having them pay tribute to the Lord through song. The non-believers of the group gave Will the idea to encourage his students to think of it as a spiritual endeavor. While the New Directions came together as one voice, each student had their own eye-opening experience in regards to their own faith and belief of the world around them.

Following all the rumble over religion and God, Kurt Hummel’s father was left at death’s door after a heart attack. Kurt’s complete lack of faith in anything put to test each of the kid’s strength in their own beliefs. Mercedes tried to bring Kurt back from the brink of despair with a stellar rendition of Whitney Houston’s I Look to You. Kurt is moved, but not into believing. Kurt says he doesn’t believe in God, and says he doesn’t want that kind of heavenly father, he wants his “real one back.”

Kurt remained the core of the Glee episode as he tried to shut out all the prayers and religious influences from his and his father’s life.

Sue Sylvester put up a fight against Will’s faith-themed songs claiming separation of church and state. She also lobbied for Kurt’s belief to not believe. Emma and Sue also went head-to-head over the issue, as Sue opened up about her younger years filled with unanswered prayers in the form of her disabled older sister. The scene between Emma and Sue was a vulnerable piece of material that Jane Lynch was immensely powerful throughout.

Despite their different religious views, Rachel (Lea Michele) and Finn got hot and heavy with some PG-13 make-out action, which only made Finn’s faith in the grilled cheesus stronger. While on a picnic, Rachel also paid tribute to Kurt’s father with a passionate version of Papa Can You Hear Me from Barbra Streisand’s Yentl.

Kurt Looks For Answers As The Rest Try To Hold On

Meanwhile, during glee club, Kurt had a flashback to his childhood with his dad, and his mom’s funeral. With Mr. Schuester’s permission, Kurt dedicated an emotional performance of I Want to Hold Your Hand to his father. Pass the tissues because this one had me wailing like a baby. On a side note, if Chris Colfer does not receive rave reviews for this performance it will be surprising.

Drying their own eyes, Kurt’s friends tried to lend a hand by using their own methods of prayer and beliefs to help Kurt. Yet, this only further alienated him.

Keeping on the subject of answered prayers, new McKinley High quarterback Sam is carried off of the field in an ambulance and, of course, Finn believed it’s because he prayed to the grilled cheesus to be the starting quarterback once again. After Emma set him straight, Finn launched into Losing My Religion by REM.

In a last ditch effort to help Kurt find peace, Mercedes tried to get her friend to come to church with a promise of no pressure and of course…a fabulous hat. During the service, Mercedes asked the congregation to give Kurt and his father a little help. She took the vocals on a tear-jerking performance of Bridge Over Troubled Water with the church choir there to back her up. 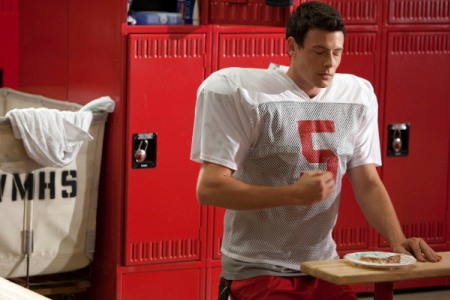 Mercedes and the gang might not have made Kurt admit he believes in something, but what he did next proved he had faith. Kurt took to his father’s bedside one last time and expressed that, while he doesn’t believe in God, he does believe in his relationship with his father. Burt responds to Kurt’s emotion with a grip of the hand. The touching moment fades into a glorious scene of all the glee club kids dressed in white as they collectively sang Joan Osborne’s One of Us.

Grilled Cheesus took on the subject of faith and tolerance for those around us with truth and honesty. At a time where many lose faith, not only in humanity but in what we believe, it’s more important than ever to be aware of what’s going on around us.

Tell us what you thought of Ryan Murphy’s latest episode of Glee and what you think of its message.