The cast of Dancing With the Stars should be used to the dragged-out results show by now, but by the looks on their nervous faces every Tuesday night, it never gets easier. 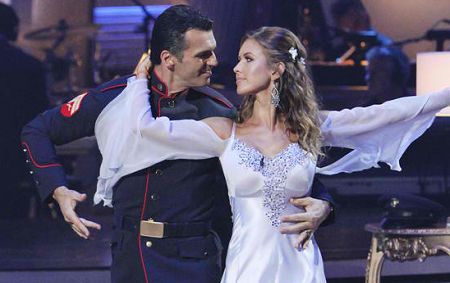 The Situation and Karina Smirnoff started the night off with an encore of their foxtrot. Some dancers then learned their fortunate fate early, such as Audrina Patridge and Tony Dovolani, as well as Kurt Warner and Anna Trebunskaya. Unfortunate souls like Kyle Massey and Lacey Schwimmer, who learned they were in the bottom right off the bat, had to play the waiting game.

Ne-Yo transformed the ballroom into an R&B wonderland with a smooth performance of One in a Million from his upcoming album Libra Scale.

Hosts Tom Bergeron and Brooke Burke announced a few more couples were safe including Jennifer Grey and Derek Hough, and Brandy and Maks Chmerkovskiy. Rick Fox and Cheryl Burke were the next couple in jeopardy. Did they make it through?

Michael Bolton, who replaced the ailing Susan Boyle, then took the stage after his scandalous exit last week. You know, the one where he crawled out of the dog house and Bruno Tonioli called it the worst jive in the history of the show? The adult contemporary artist gave a haunting performance of Hallelujah that sent shivers down my spine. The dancers and choir around him didn’t hurt either.

After all the performance hoopla, The Situation and Karina Smirnoff were declared safe while Bristol Palin and Mark Ballas were left waiting their fate. Also joining the safe circle was Florence Henderson and Corky Ballas.

That left Margaret Cho and Louis Van Amstel in the bottom fighting for safety.

Tom Bergeron and Brooke Burke wasted no time in sending Kyle Massey and Lacey Schwimmer on for another week. Rick Fox, Cheryl Burke, Bristol Palin and Mark Ballas soon followed. That meant it was time for Margaret Cho and Louis Van Amstel to hang up their dancing shoes. Cho credited the judges for being hard on her because they knew she really could dance.

Do you agree with who America sent home? Who do you think will be next to go?