Zach Galifianakis is a little warm. Sitting in our hotel suite at the Toronto Film Festival, Galifianakis is wearing a wool sweater that is currently getting the best of him heat-wise. “Is it hot in here?” Galifianakis asks as we enter the room. It is quite hot, but then again, so is Galifianakis’ career.

Galifianakis got his start as a stand-up comic and as such, is perhaps taking the Jim Carrey or Steve Martin path to cinematic stardom. Although he garnered much of the laughs in comic hits such as The Hangover, Galifianakis is showing a more dramatic side (albeit still funny!) in the new film, It’s Kind of a Funny Story. 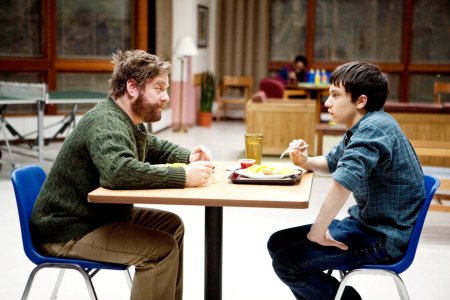 It’s Kind of a Funny Story is based on the true story and best-selling book by Ned Vizzini. It’s the tale of a teenager who contemplates suicide and winds up in an adult mental institution in New York City. Galifianakis’ character, Bobby, almost serves as a mentor to our young protagonist (played by Keir Gilchrist of United States of Tara) as he navigates the world of the mental institution. While in the institution, Craig Gilner meets Noelle (Emma Roberts) and in the process of his new experiences with Noelle and Bobby, finds that he is much saner than he ever thought. 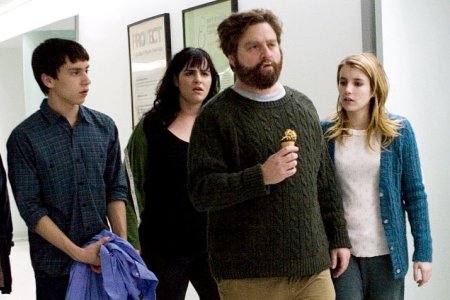 Galifianakis welcomed the challenge of tackling a more dramatic approach to acting than his pratfall-filled pranks in other films such as The Hangover, Dinner with Schmucks and the upcoming Due Date with Robert Downey Jr. He’s also filming the sequel to The Hangover and has been cast as the voice of Humpty Dumpty in the Shrek spin-off movie, Puss in Boots.