Harry Hamlin and Lisa Rinna, along with the rest of America, learned of a break-in at the clothing store live on national television. Could this actually help their careers? 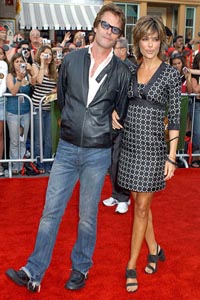 Husband and wife actors Harry Hamlin and Lisa Rinna had their Sherman Oaks, Calif. clothing store burglarized this morning — and Today Show viewers were there to hear the drama unfolding.

Hamlin and Rinna were on the show to discuss their new books, reality show and plastic surgery when Hamlin told hosts Kathy Lee Gifford and Hoda Kotb that he needed to take a call because their stores was hit by robbers.

“The store is being robbed?” Hamlin asked the caller about their store, Belle Gray. “They take much? They took piles from the first two racks, yes?”

The unfortunate break-in is definitely a public relations coup for the C-list couple, especially with two books and a reality show to promote. Honestly, who would pay attention otherwise? They haven’t acted in a hit show or movie in years, and Rinna is known more for her botched plastic surgeries than her acting ability. Now they’re receiving media coverage all over the web and TV — you can’t buy that kind of PR!

OK. OK. No, robbery is never a good thing, but in the short run it’s helping their careers.

The world is a funny place sometimes, isn’t it?