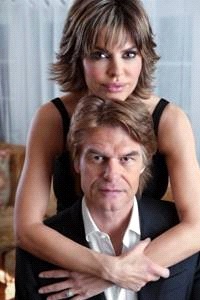 In the premiere episode of Harry Loves Lisa, Harry learns he came off as bizarre during an audition and turns to stand-up comedy for help. Viewers will also watch as the couple tries to keep their clothing store Belle Gray afloat (Rinna’s store was broken into today) and tackles image issues with their daughters throughout the series.

During the process of filming their reality show, Lisa Rinna learned that she could reverse the enhancement she had done to her lips, something she didn’t realize before. She told the Today show, “I thought you have silicone put in, it’s permanent.”

After being the butt of many jokes and getting heckled on Twitter for her unevenly large upper lip, Lisa Rinna had surgery in August to reduce its size. She told Today host Meredith Vieira she “no longer wanted my lip to be what defines me.”

Harry Hamlin on the other hand didn’t seem to have a problem with his wife’s appearance as he, also appearing on the Today show, followed that up with, “I fell in love with those lips. I kissed those lips for 18 years. There’s nothing wrong with them, I can tell you that.”

Harry Hamlin and Lisa Rinna have been married for 13 years. She most notably starred on Days of our Lives and Melrose Place, while he is of the original Clash of the Titans and L.A. Law fame. Both actors competed on Dancing With the Stars and co-starred in Veronica Mars and the Broadway musical Chicago.

Harry Loves Lisa will premiere on TV Land on October 6 at 10 p.m.