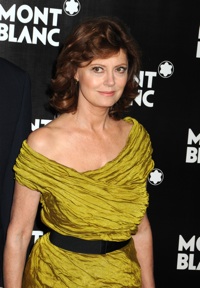 The actress, currently starring in the super-successful Wall Street: Money Never Sleeps, says her long-term but unmarried relationship made the most sense to her.

“I’ve always liked the idea of choosing to be with somebody,” Sarandon told People. “I thought that if you didn’t get married, you wouldn’t take each other for granted as easily. I don’t know if after twentysomething years that was still true.”

“Your relationship with people or with your job has to be a growing organism,” she said. “It’s not something where you reach a certain point and then you start preserving it. You have to nurture it, you have to stay curious and hungry and foolish. Once you stop doing that, you get satisfied, and you get stuck.”

Sarandon met Tim Robbins in 1987 on the set of Bull Durham. The couple has two children, Jack, 21, and Miles, 18, but never took the relationship to the courthouse.

“You bring people into your life at certain times,” she said. “Maybe you have a relationship to have children, and you realize that it’s fulfilled after that point.”

Susan Sarandon and Tim Robbins aren’t the only Hollywood couple to live like a married couple without the piece of paper. Goldie Hawn and Kurt Russell have enjoyed a relationship for over 25 years without the ringing of wedding bells and raised four children together, three from previous relationships. Angelina Jolie and Brad Pitt have been together since at least 2005 (and probably earlier, when they were filming Mr and Mrs Smith in 2004), have six children together and have no public plans to marry.

Will these two couples go the distance, or will they wind up splitting after nearly a lifetime together like Susan Sarandon and Tim Robbins? Only time will tell, but Susan’s words are a wise lesson to us all: Never take your relationship for granted.

read on for more susan sarandon