The Real Housewives of Atlanta are back for a third season of drama. Were you Tardy for the Party? Catch up on what you need to know about NeNe, Kim, Sheree, Kandi and the gang with our recap.

The Real Housewives of Atlanta are back for a third season and if the premiere episode is any indication, we’re in for quite a ride. 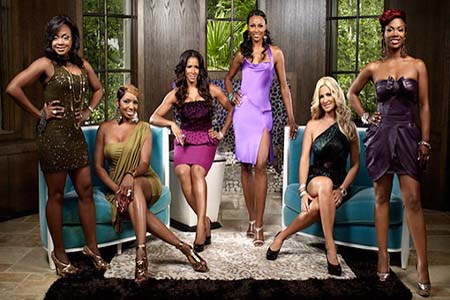 The biggest revelation? Housewives are gossiping about each other. OK, maybe that isn’t such a revelation, but it sure makes for good TV. Dwight Eubanks is spreading gossip all over the ATL, telling everyone (namely Kim Zolciak) that he gave NeNe Leakes’ husband Gregg a loan for $10,000 that was never paid back. NeNe confronts her husband, who says they were involved in some sort of investment scheme that would net them $200 in return for their $500 investment. Something doesn’t add up there.

She ultimately confronts the Dwight at a shoe party with a whole lotta attitude, though Dwight doesn’t have much to retort.

“Save your drama for someone else,” he told NeNe. Oh, burn.

Sheree Whitfield declares her intentions to become an actress, even holding acting classes in her living room.

“Fashion will always be my passion,” Sheree told Kathy Lee Gifford and Hoda Kotb on the Today Show this morning. “But I want to act.”

Kim comes clean on her lesbian relationship with DJ Tracy Young, though much of it was old news since she spilled the details to a gossip magazine. She reveals that she’s already moved on from the relationship, though no one is quite sure who she’s really with these days. It’s almost certain we’ll find out soon enough.

Pregnant entertainment lawyer Phaedra Parks is introduced in the episode, replacing former Housewife Lisa Wu Hartwell. Parks has reportedly represented clients like Bobby Brown and is married to Apollo Nida, an (alleged) ex-con. And, surprise! She fits seamlessly into the drama — she’s Dwight’s attorney and doesn’t like NeNe (they have a past), declaring her “not very ladylike.”

Oh boy, this is already shaping up to be a good season. Let the drama commence!