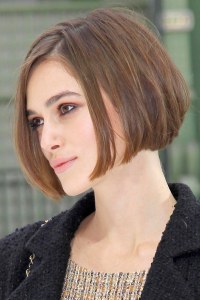 Paris Fashion Week is always about what’s new, hot and funky, and today, it appears, Keira Knightley’s retro ‘do fits the bill. Knightley showed off a sleek new look at Tuesday’s Chanel Spring-Summer 2011 show and her new retro bob is all the talk!

“I had my hair bobbed about a month ago. Then I had it freshly trimmed again this morning,” Knightley told UK InStyle.

The new look definitely works for Knightley, but with all the hoopla, SheKnows is having flashbacks to Keri Russell’s (Running Wilde) infamous on-air haircut during her run as Felicity.

Knightley says the big change wasn’t for an upcoming project. Like Felicity, she just wanted to shake things up for herself.

Of course, the 25-year-old Brit does have plenty of projects in the works. Her indie flick with Carey Mulligan, Never Let Me Go, is in theaters now and A Dangerous Method and The Emperor’s Children are set to release next year.

“I am spending most of my time working and on film sets,” Knightley recently told Parade. “It’s a very protective kind of bubble, which is fantastic, so I haven’t been overly aware of [the spotlight of fame]. At the moment, what I want to do is make films and, therefore, all is good.” 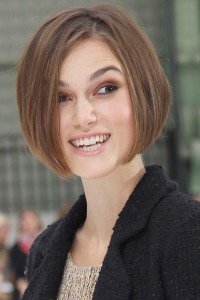 Knightley also took time away from the camera to hit the stage for the play The Misanthrope and her performance landed her a Laurence Olivier award nom for Best Supporting Actress. “I was very lucky, and I’d love to do more theatre!” she gushed to UK InStyle.

“I was 17 when I started it and 21 when I finished,” Knightley told Parade. “I think that was enough for me. Three films, it was wonderful, but that was it and I’m on a different path. I can’t wait to see the new one. I’m sure it’s going to be fantastic. I’m fine not being a part of it. It was time for me to dive into other worlds.”