With two eliminations behind us in the form of David Hasselhoff and Michael Bolton, we’re down to ten couples on Dancing With the Stars. Let’s see how this week’s daring dancers fared on the floor.

With the Michael Bolton elimination and scandal behind us it’s time to move on in the race for the mirror ball trophy. On this week’s episode of Dancing With the Stars, the first nines of the season came from a Hills beauty in Audrina Patridge and not a dirty dancer in Jennifer Grey. 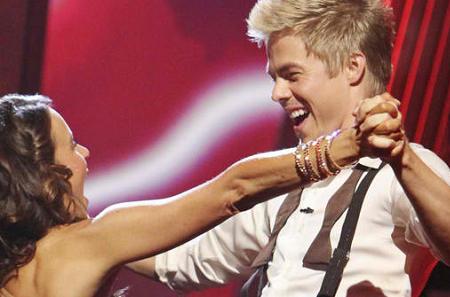 The Hills star Audrina Patridge and her partner Tony wowed the ballroom with her classy waltz dedicated to fallen troops and their loved ones. The graceful dance was deemed “the most touching dance of the night” and earned nines from Bruno Tonioli and the normally critical Len Goodman.

Jennifer Grey, who has been hailed as a top contender from the start, showed her first hint of error in her technique, with Len Goodman pointing out the “twiddly” bits of her samba.

The rest of the cast fell to the middle or bottom of the pack. Here’s your Dancing With the Stars breakdown. 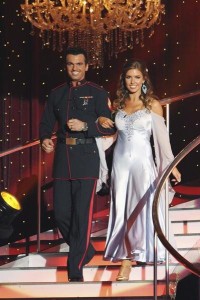 Brandy is a dancer and her samba was miles better than the jive. There’s still a disconnect between her and Maks that is stopping her from being top dog.

Poor Bristol Palin let her lack of experience get the better of her. The judges rightfully touched on her ability to do a good foxtrot but her acting and performance skills halted any chance of being number one for the night.

The Situation and Karina

I have been waiting for The Situation to surprise us and on week three he did it. The Situation and Karina did a futuristic foxtrot to The Black Eyed Peas’ Boom Boom Pow. He wasn’t perfect but he was leaps better than he’s been in the past two weeks. Bruno even said, “Very futuristic, sometimes apocalyptic, but in a weird way, very entertaining.”

Florence Henderson took on the character of Maria from The Sound of Music. You might remember it as a role she played onstage decades ago. The waltz between Henderson and Corky Ballas was fine but their kiss at the end might have been the steamiest thing about the dance. 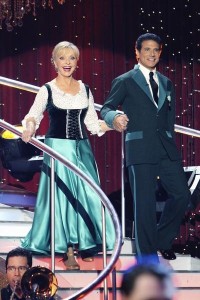 Kyle Massey and Lacey Schwimmer are making their way into my heart week-after-week. The excitable Disney actor brought it down a notch and waltzed his way into being a dark horse contender. Len did call his footwork “atrocious” and “nonexistent” but I don’t care — he was great.

Cheryl Burke is no stranger to hunky dancers and Rick Fox brought the heat. He played it safe and didn’t create too many mistakes for the judges to pick on. His sexy shimmy distracted from any issues they might have caught.

Kurt Warner danced the foxtrot and the judges liked it. I, however, did not get it at all. They somehow scored the same as Lacey and Kyle, who exuded more grace than the athlete.

Margaret Cho’s samba was definitely a problem. Cho let her freak-flag fly in a rainbow-flag dress, while being praised for her message of pride. Margaret Cho replied, “I think this is the gayest thing that has ever happened, so I could not contain myself!” Her noticeably heavy footwork took her samba down a peg.

See who goes home tonight on Dancing With the Stars and check out performances by Ne-Yo and Michael Bolton, who is stepping in for Susan Boyle while she recovers from a throat infection.