Actor Tony Curtis was laid to rest Monday in a funeral fit for a legend.

Long before the funeral for Tony Curtis began Monday, family and fans lined up at the Palm Mortuary and Cemetery in Las Vegas as photographers and journalists watched the crowd in awe. 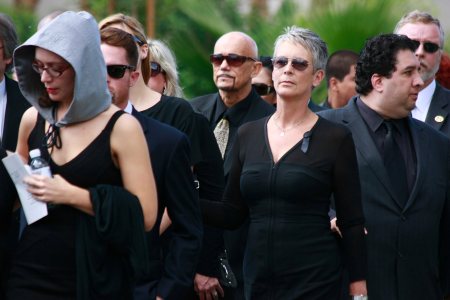 The inside of the Palm Mortuary and Cemetery was decorated with seven vividly bright paintings and three black-and-white drawings by Curtis balanced on easels. A photo of a younger Tony Curtis was projected on a screen while his coffin was neatly draped with an American flag.

The 85-year-old Oscar-nominated star, who died after cardiac arrest on September 29, was buried with a few of his favorite items — a Stetson hat, an Armani scarf, driving gloves, an iPhone and a copy of his favorite novel, Anthony Adverse. The book inspired his famous name and kicked-off a full career.

Spirits were raised as the congregation took in scenes from the television series The Flintstones as well as the movie Spartacus.

Jamie Lee Curtis welled with emotion as she described her father as “a little meshuga,” Yiddish for crazy, but always full of life. “All of us got something from him. I, of course, got his desperate need for attention,” Jamie Lee Curtis joked.

Rabbi Mel Hecht introduced Arnold Schwarzenegger to say his own goodbye. The actor and Governor of California remembered Curtis as his mentor and biggest advocate when others told him his accent and name were career breakers.

“You are going to make it,” Schwarzenegger remembered Curtis telling him. “Don’t pay any attention to those guys. I heard the same thing when I came here.”

Tony Curtis arrived in Hollywood with the strongest of Bronx accents!

Schwarzenegger also recalled Curtis’ refusal to feel old. “I mean, who has the guts to take off their clothes at the age of 80?” Schwarzenegger said in reference to Curtis’ naked Vanity Fair photo shoot in 2005.

Jill Curtis, Tony Curtis’ sixth wife, fondly looked back on her husband of 12 years. He wasn’t bothered by their 45-year age difference when asked if he was worried about having a younger wife. “Well, if she dies, she dies,” Jill said her husband would jokingly reply.

She touched on his love of Krispy Kreme doughnuts, Splenda, his dog and white clothing while telling loved ones that “he was, as one fan put it, a once-in-a-lifetime man.”

As the funeral closed a second film reel played to the crowd. The montage came to a halt with the words “The End” on an image of Curtis shaking his head, almost looking down on those grieving his loss.

A burial followed the funeral and then those who knew him best gathered at a reception for more than 100 guests at the Luxor hotel-casino on the Las Vegas Strip.

Jill Curtis told the Associated Press her husband would have approved of the goodbye party. “Tony didn’t like funerals,” she said. “He didn’t want to make it funeral-y, more like a celebration.”