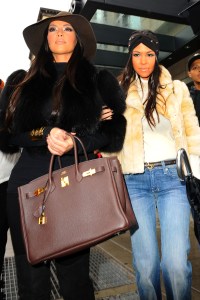 Kourtney already took Miami and Kim kept up with LA. With sister Khloe settling in with husband Lamar Odom, it was only a matter of time before Kourtney and Kim combined to form a new reality show minus their baby sister.

“Mason, Kim, Scott and I arrived in NYC,” Kourtney shared on her blog Monday. “So excited for some fall in the Big Apple. No place better.”

Kourtney added: “Are you ready, NYC?”

Kim gave her own shout-out to New York City via Twitter Sunday. “Fireworks over the Brooklyn bridge! Welcome to NYC bayba baaaybay!”

Are you excited to see Kris Jenner’s oldest daughters take a bite out of the Big Apple in Kourtney and Kim Take New York?

Read on for more on The Kardashians