Susan Sarandon is talking about her split from Tim Robbins, finally. 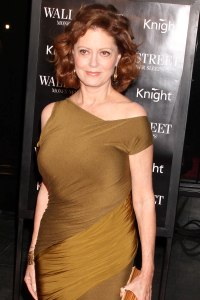 Last year, when a representative for Susan Sarandon announced the actress’ 23-year relationship with Tim Robbins, 51, had ended several months earlier, we were both stunned and saddened.

Sarandon, 63, now admits that no one was more shocked than her.

The couple, who famously never married even though their relationship lasted over two decades and the pair had two sons together, seemed like Hollywood’s new Paul Newman and Joanne Woodward, as committed to acting, activism and altruism as they were to each other.

“People were coming up to me in the street and saying, ‘I cried and cried when I heard,'” Sarandon tells London’s Telegraph. “Well, I was sadder! I didn’t think it would ever happen, either.”

So, then why did it happen?

If the actress is to be believed, it was simply a case of two people growing apart. “You bring people into your life at certain times. Maybe you have a relationship to have children and you realize that it’s fulfilled after that point,” she said.

Susan Sarandon and Tim Robbins, who just happen to be on the front page of Yahoo again today, with Susan as the number one trend, met and fell in love on the set of Bull Durham. Sarandon, who got her name from her first marriage to Chris Sarandon, calls herself a “serial monogamist” who has “always liked the idea of choosing to be with somebody.”

Whether or not she’s currently choosing to be with Jonathan Bricklin, her 31-year-old business partner in SPiN New York, a ping-pong social club, she won’t confirm or deny.

“There are lots of people in my life at the moment,” Sarandon said.