Perennial Oscar contender Diane Lane may have another nomination on her hands for portraying the real-life inspiration Penny Tweedy in Secretariat. Lane’s character is the real-life woman who took a little-known horse and helped mold the speedster into the last Triple Crown winner.

Lane’s housewife takes the reins of her father’s horse passion and makes history. This is not the first film production to approach Tweedy about her life story. However, it was the first to get her blessing, in large part due to the story director Randall Wallace proposed to tell, but also because Tweedy adored the choice of Diane Lane to portray her life story as it pertained to Secretariat. 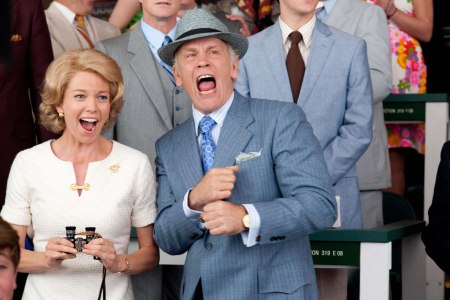 Secretariat captured the fascination of the entire country in 1973, and even appeared on the cover of Time Magazine. As a motion picture, Secretariat brings horse racing action at the audience like no other film before, but at its heart, Secretariat is a story of one woman’s determination to break the glass ceiling of horse racing. The result is pure history.

Lane sits down with SheKnows at the Santa Anita Racetrack in Arcadia, California to talk about the finer points of capturing Penny as well as how Secretariat is not only an inspiration to women the world over, but to every soul on the planet believing in the mantra that “true greatness comes to those who refuse to hear the word no.”

Diane Lane has been charming movie-goers since she stole hearts in Francis Ford Coppola’s The Outsiders and Rumble Fish. She again got a part in Coppola’s next film, The Cotton Club, which would also serve as her first of many roles starring opposite Richard Gere. Lane and Gere would go on to star together in Unfaithful and Nights in Rodanthe.

Lane’s memorable roles are many, but just a sampling includes The Perfect Storm, A Walk on the Moon, Under the Tuscan Sun and Must Love Dogs. It is easy to see how she has become one of Hollywood’s go-to actresses.