Bret Michaels won’t confirm or deny reports that he’s engaged to longtime girlfriend Kristi Gibson. The pair reunited after major medical problems threatened his life. Is he playing coy, or does he just want to keep that part of his very-public life private?

Related story Bret Michaels in 6 hospitals in only 2 weeks: Is he OK?

Bret Michaels might be engaged to longtime girlfriend Kristi Gibson, but don’t ask him to admit it. 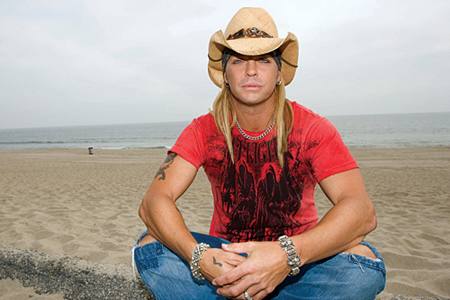 Despite numerous reports, the Poison frontman won’t confirm or deny numerous reports that he’s finally ready to tie the knot with Gibson — the mother of his two daughters, Raine, 10, and Jorja, 5. The pair rekindled their romance after she was at his bedside during his serious health scares earlier this year.

“We love and respect each other, but we don’t know if it’s going to end in a perfect situation,” Michaels told The Miami Herald. “There’s something that draws us back to each other, physically and emotionally.”

The year 2010 has been challenging for Michaels, to say the least. His health problems started in April after an emergency appendectomy led to a brain hemorrhage and warning stroke. While in the hospital, doctors found a hole in his heart — a previously-unknown defect he’s had since birth. The rocker will undergo heart surgery in January 2011 to repair the hole.

“The whole thing may have been a blessing,” he told The Miami Herald. “They found out what my problem was. So hopefully I’ll be back up to 100 percent, or at least 95 percent.”

Bret Bares All for Billboard

Micheals bares all on the cover, except for a strategically-placed dot on his nether regions. Don’t worry — he’s also wearing his trademark bandana.

How did the diabetic Michaels get ready for the exposure?

His buff bod puts younger men to shame — and he deserves it, after the year he’s had.