Woody Allen has a history of crafting supporting actress roles that earn Oscar’s notice and Lucy Punch is keenly aware of that fact. Punch portrays the woman who steals Anthony Hopkins’ heart in Allen’s latest comedy, You Will Meet a Tall Dark Stranger.

Whether it was Dianne Wiest nabbing an Oscar for Best Supporting Actress for Hannah and Her Sisters or Mira Sorvino taking the Best Supporting Actress Oscar for Mighty Aphrodite, Allen’s actresses reap rewards. An interesting fact to point out is Sorvino won her Oscar for portraying a call girl. What is Lucy Punch’s role in You Will Meet a Tall Dark Stranger? You guessed it, Punch is playing a prostitute. 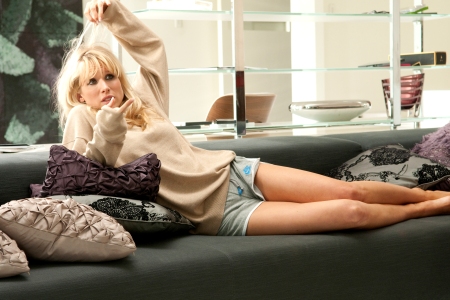 The actress welcomed the opportunity to appear in a Woody Allen film and also to join his legacy of great roles for actresses. But, what really scored high marks for Punch in the making of You Will Meet a Tall Dark Stranger are the scenes she shared with Brolin, Watts and Hopkins. With all that legendary talent sitting around a table filming a scene with Punch, she had to pinch herself.

Lucy was most recently seen by American audiences opposite Steve Carell and Paul Rudd in Dinner for Schmucks. Viewers might also recognize her from her scene-stealing turns in The Life and Death of Peter Sellers, Hot Fuzz and St. Trinian’s School for Girls. Also, don’t miss her starring role with Justin Timberlake and Cameron Diaz in Bad Teacher in 2011.

Punch sat down with us for an exclusive video interview to talk about working with Woody, sharing scenes with acting legends and the finer points of playing a call girl, with or without the heart of gold.