Emma Stone is reportedly set to star in the upcoming Spider-Man 3D as Gwen Stacy, opposite Andrew Garfield. Who did the red-headed actress beat out to win the coveted role? 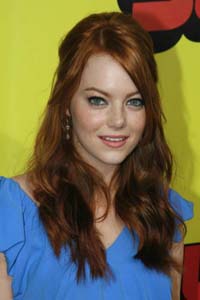 Emma Stone is the latest cast addition to the upcoming revamped version of Spider-Man.

Stone reportedly won the role over other high-profile actresses, including Glee’s Dianna Agron and Alice in Wonderland’s Mia Wasikowska. No doubt her breakout performance in Easy A helped secure her spot as Hollywood’s latest “it” girl.

Despite reportedly losing out to Stone, Agron is reportedly still in the running for another role in the flick.

Sony Pictures announced earlier this year that the upcoming version of Spider-Man will be filmed in 3D. (500) Days of Summer director Marc Webb is signed on to direct the flick, slated for release in summer 2012.

What do you think about the new cast of Spider-Man 3D?