Susan Boyle’s visit to America’s Got Talent was a disaster, but that won’t keep her down. The emotional songstress is set to appear on the Dancing With the Stars results show Tuesday, October 5.

Susan Boyle is scheduled to hit Dancing With the Stars, but don’t expect her to shake a tail feather. The crooner is set to sing Leonard Cohen’s Hallelujah. 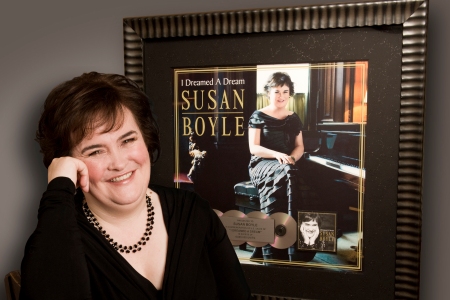 The choice isn’t likely to cause any last minute drama, unlike Lou Reed’s Perfect Day. That track from her new album turned her America’s Got Talent visit into more of a nightmare than perfection.

Back in early September, Boyle was set to perform Perfect Day on America’s Got Talent, but according to TMZ, Lou Reed is a Boyle-hater and he denied her the right to perform his song. The story went that a heartbroken Boyle ran back to London in tears.

Reps for Reed, however, refuted that angle, saying the denial was simply a clearance glitch. Legally, the song had been cleared for performance in the UK, but not in the States.

Whatever went down, Boyle isn’t going to let the AGT drama stop her.

DWTS isn’t anything new to Boyle. She sang her record-breaking hit, I Dreamed a Dream, on the show last November to promote her album of the same title.

Now, the breakout star has another album to promote and it’s already a bestseller!

Boyle’s new album The Gift goes on sale November 9, but it’s available for pre-order on Amazon. When the pre-order was announced a few weeks ago, The Gift immediately shot to number one on Amazon’s bestsellers chart!

Tonight, ten celeb contenders will get their Dance on. Teams still in the game are Kyle and Lacey, The Situation and Karina, Brandy and Maksim Chmerkovskiy, Florence Henderson and Corky Ballas, Bristol Palin and Mark Ballas, Rick Fox and Cheryl Burke, Margaret Cho and Louis Van Amstel, Audrina Patridge and Tony Dovolani, and Kurt Warner and Anna Trebunskaya.