Kanye West came out swinging at the 2010 VMAs, proving he can make fun of himself and admit when he’s wrong. West kept his streak alive showing the world he’s still a force during an unusual Saturday Night Live performance.

Kanye West was this week’s SNL musical guest and if you were paying attention you might have noticed things seemed a little different. Normally musical guests perform on the standard Grand Central Station-infused Saturday Night Live stage with minimal dancers and condensed instrumental backgrounds — but this is Kanye West and there is nothing typical about this man. 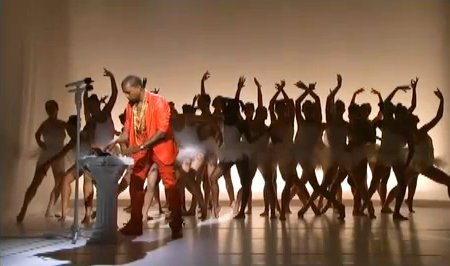 West broke another barrier by elevating his late night appearance on SNL to epic proportions. The rapper with a pungent for outlandish rants opted for an all-white dream-like background littered with dancers for his first number, Power. The scene looked like it jumped right out of a cutting edge video shoot. It definitely did not look like he was on the SNL stage.

For his second number, Runaway, the track he shocked us with at the 2010 VMAs, West threw down his own beats with pretty prima ballerinas behind him. It seriously looked like he came right from the VMA performance and delivered the same exact stage-rocking act. I loved his Saturday Night Live appearance.

The change in scenery could be a bold move on Kanye West’s part. He admitted wrongdoing for sabotaging Taylor Swift’s 2009 VMAs speech and at this point needed to prove he’s back in a big way. Messing with the setting of an iconic late night comedy show is gutsy, but then again we never said he wasn’t.

What did you think of Kanye West’s Saturday Night Live performance? Sound off in the SheKnows comments section.