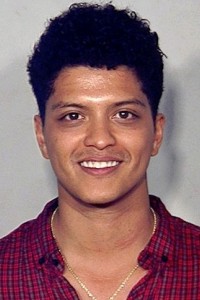 The Just the Way You Are singer was arrested September 19 after a performance at the Hard Rock Hotel & Casino’s Wasted Space nightclub. The budding star was allegedly found in possession of 2.6 grams of cocaine after being detained by a hotel security guard. What is it with Las Vegas and celebrities’ indiscretions?

The Clark County district attorney’s office allegedly filed an official criminal complaint against Bruno Mars October 1 and the singer will head to court on November 18 on a charge of possession of a controlled substance. If convicted, Mars — whose real name is Peter Hernandez — faces up to four years in prison and a $5,000 fine.

So how did the rising young star get caught?

Claims allegedly made in the arrest report say a bathroom attendant told police Mars was taking a long time in the stall and was accompanied by a bag filled with a white powdery substance. Sounds like a simple case of putting two and two together. A security guard allegedly stopped the singer as he left the stall and asked him to hand over any narcotics he had. Lo and behold Mars then handed over a bag of cocaine.

Bruno Mars was then allegedly detained in a holding cell, where he was questioned by an arresting officer and claimed he never took drugs before this. I wonder if he’s taking a page from Paris Hilton’s book.

Elektra Records released a brief statement Friday: “We congratulate Bruno Mars on his chart-topping success, and provide him with our full love and support.”

Bruno Mars’ debut album, Doo-Wops & Hooligans, is scheduled to drop Tuesday. Interesting timing, don’t you think? The singer sang hooks on the smash hits Nothin’ on You and Billionaire and his own single Just the Way You Are is heating up the charts. Can Bruno Mars juggle success and protect his image with a felony charge hanging over his head? You tell us. We want to know.