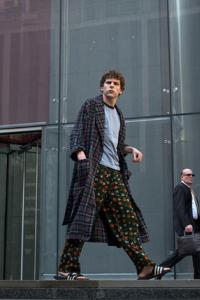 Box office numbers, according to Box Office Mojo, show The Social Network starring Jesse Eisenberg and Justin Timberlake came in first, pulling in an estimated $23 million in its opening weekend.

Justin Timberlake is a proven hit maker, but playing Napster founder Sean Parker in The Social Network was not always an easy sell.

“That scared the s–t out of me,” Timberlake revealed in the new issue of Us Weekly. “This movie’s dense. There’s a lot there. It would take me all night to sort of go through what we talked about, about what this character is.”

Relax, Justin Timberlake, you had this in the bag from the start.

Turns out the film based on Facebook creator Mark Zuckerberg’s climb to the top isn’t Justin Timberlake’s first number one movie. Timberlake found glory with his fairytale hit, Shrek the Third, which debuted with a cool $121 million back in 2007.

The Social Network beat out the high-flying Legend of the Guardians: The Owls of Ga’Hoole which came in second at $10.8 million and Wall Street 2: Money Never Sleeps which earned third place with $10.1 million for the box office battle.

Bringing up the rear for top grossing weekend numbers were Ben Affleck’s The Town in fourth with $10 million and Emma Stone’s Easy A in fifth place, which came through with an estimated $7 million.

Tell us what you think of Justin Timberlake’s performance as Napster founder Sean Parker.

Read on for more The Social Network

25 mins ago
by Giovana Gelhoren