Emily Procter is expecting her first child around Christmas and promises the fans of CSI: Miami that she “will not miss an episode.” Procter is a vision of maternal beauty in a Hollywood photo studio where we find her doing a photo shoot for Palmer’s Beauty Products. Particularly a fan of the company’s tummy butter, she proudly sports her baby bump for the camera while touting the product’s ability to stave off those dreaded stretch marks. 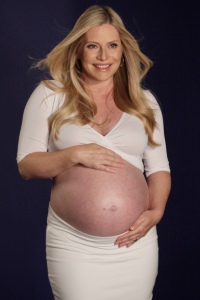 For Emily Procter, 41, her career has always driven her and now she is ready to put motherhood in the driver’s seat of her life, while still working every day on CSI: Miami.

Although she is best known for her leading role on CSI: Miami opposite David Caruso, Procter has been a film star for well over a decade. Many viewers fell in love with her portrayal of Ainsley Hayes on Aaron Sorkin’s The West Wing. She is also a film presence with her work in Jerry Maguire, Body Shots and Leaving Las Vegas.

CSI: Miami premieres October 3 and Procter promises a season to top all the others and although she is incredibly proud of the show, the actress feels as an older mother, she has earned the right to let her career speak for itself while she fully embraces the blissful world of motherhood.

SheKnows: Sure, CSI: Miami is premiering October 3, but you have some other big news, no?

Emily Procter: Yeah, my pregnancy is the biggest thing in my life right now!

SheKnows: Here you are at a photo shoot for Palmer’s Beauty Products, it has me wondering: Of all the products you could attach your name to, why Palmer’s for your pregnancy skin?

Emily Procter: It’s funny, I have a hard and fast rule that I would never endorse a product that I don’t personally use and really, really love. The nice thing about this product is I’ve been using Palmers. I read about it in a magazine a couple of years ago. I happened to try it and thought it was great. When I got pregnant, I expanded what I was using from the line to use a couple of products, one of which is my go-to favorite product — tummy butter. It smells like lavender and it’s great for hands and feet, and obviously it’s designed to moisturize your belly and prevent stretch marks. It’s something that I highly recommend for anyone, even for men. 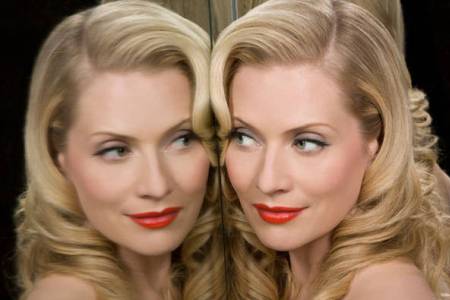 SheKnows: Being a celebrity, the world wants to know about your pregnancy. Is it a challenge for you to keep it still between you and this little baby that’s growing inside you or are you more than willing to share it with the world?

Emily Procter: It was one of those things where I wanted to see how the pregnancy progressed before I made any sort of announcement. I was home for the summer and I kept going places and hearing from people, “Oh my gosh, I heard you’re pregnant.” [Laughs] What? Apparently, my dad took it upon himself to let the world know he was going to be a grandfather finally. [Laughs] That’s how that turned out. It’s been fine. My job prepared me nicely for having people come up and randomly touch me because that’s what happens all the time. People just come up and touch my sweater or fix my hair. Nobody ever says, “Here I come, I’m going to touch you!” Now, everyone’s touching my belly. I’m completely used to it. It feels normal to me. 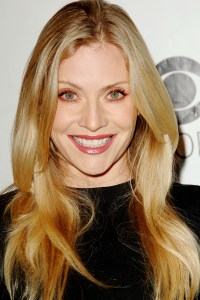 SheKnows: What parts of your childhood, or how you were raised, do you seek to replicate as a mother yourself?

Emily Procter: I hope to teach my child to toilet paper as many houses as possible [laughs]. Seriously, one thing I’m going to miss in Los Angeles versus North Carolina is that it is so much bigger here. I’m looking forward to seeing how I will handle that. One thing I love about being in Los Angeles is there are so many wonderful parks. There are great places to play outside. That was not available to us as a child, because it would get cold. At a certain point, you didn’t play outside because it was winter. Parts of my childhood I’d like to recreate for my child? I don’t know. I feel in a lot of ways I’m still living the way my family raised me. I’m a big holiday person. I’m one of those people who is decorating for Halloween the first day of October [laughs]. I’m just going to do a lot of the same things my mom did with me. My parents were really good at showing us where the origins of things were. We went to a dairy farm, things like that.

SheKnows: In the last couple of years, there’s been a real trend for the press to cover celebrity babies, almost like the babies of celebrities become celebrities. Are you ready for that? Or, are you seeking to be more of a shielding mother to keep the press away from your little one?

Emily Procter: The one thing I’ve noticed about having my job, for myself, is that I always felt that if I behaved normally and acted the same, people are going to treat me the same. I think it worked. I think with a child, I’m already in severe danger of being overprotective. I would have done that anyway. I hope I will give my child the freedom to not be that protective of them constantly. It’s just going to be life as normal for us. That’s what I hope, anyway [laughs].

Procter and the work-motherhood balance

SheKnows: Such an issue for women all over the world, how do you seek to balance your career and motherhood? 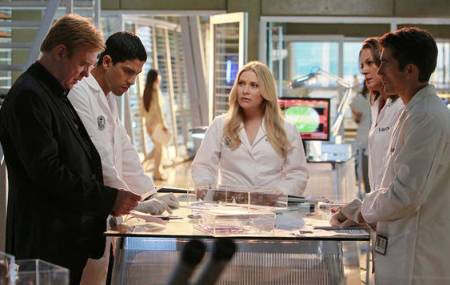 Emily Procter: One thing I think that is nice about being an older mom is that my career is established enough that motherhood is going to step up and take the primary role. I feel very thankful for that. I’m also in a position that the people that I work with are parents to children too. They’ve already been wonderful with me being pregnant. It’s going to be great. I’m just going to take the baby to work. That’s my plan.

SheKnows: CSI: Miami is premiering October 3, how’s the shoot been while pregnant?

Emily Procter: It’s been great for me. In every scene, I’m just sitting in a chair [laughs]! You don’t understand, this is my favorite season so far.

SheKnows: Are they going to write that into your storyline, or are you just sitting at tables and walking around holding a folder over your belly?

Emily Procter: [Laughs] The good news, I’m due anytime before Christmas. They’ve been very nice about it thus far, but I have a feeling that people are going to be tapping their watch, looking at me, ready for me to go to the gym in February. “Alright, you don’t get to sit down anymore.”

SheKnows: Are you going to take any time off after having the baby?