In case you haven’t heard, Jimmy Fallon and Justin Timberlake are one hot rap duo! Timberlake stopped by Fallon’s talk show to promote The Social Network — but ended up doing an amazing History of Rap duet.

Justin Timberlake and Jimmy Fallon’s History of Rap was three minutes of pure magic in which they covered hip hop’s best moments. 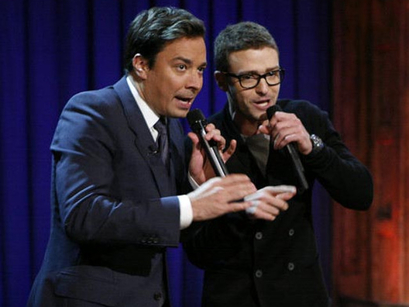 Fallon said he was up rehearsing until “two in the morning,” because “you know I can’t rap!” Fallon could have fooled us!
This isn’t the first time Timberlake and Fallon have performed together. They did a hilarious skit on Saturday Night Live as Barry and Robin Gibb of the Bee Gees.

Rap songs in The History of Rap

With The Roots backing them up, the Timberlake and Fallon rap covers these hip hop songs:

Tell us: Did they leave any songs out?

Fallon & Timberlake’s The History of Rap