Tony Danza made us laugh on Who’s the Boss and now the popular sitcom actor is getting real in his new series, Teach: Tony Danza on A&E.

Tony Danza was the driving force on such television hits like Taxi and Who’s the Boss. Now Danza is returning to the classroom to teach tenth grade English and A&E has documented his every move on the new series, Teach: Tony Danza. “I worked harder than I’ve ever worked,” Danza told TVGuide.com. “Emotionally, it was the most trying thing at times.” 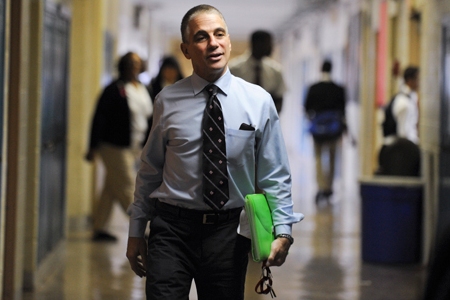 So, why did Tony Danza choose to step into the world of teaching for the new reality show? Before Danza became a television star the actor was actually studying to become a teacher. Of course, his early life took him on a different path and only recently did he begin contemplating a return to teaching.

Danza’s television friends also helped move the process along. “I was having a conversation with one of my crazy friends who is a TV producer and he said, ‘You know, that would make a heck of a TV show,'” Danza told TVGuide.com.

Even though Tony Danza isn’t new to the world of cameras, the reality show was still a challenge for the actor to get used to. “I was totally frightened and terrified that I would not only make a fool of myself, but let the kids down,” he said. “I know the kids signed up for this, but they didn’t sign away their tenth grade of English. It was very important to me that they got a year of it.”

Teach: Tony Danza obviously focuses on Danza’s return to teaching, but the kids are a huge part of the program as well. The students consist of 25 kids between the ages of 15 and 16 who attend Philadelphia’s Northeast High School. They were Danza’s biggest hurdle. “The kids test you. They know when you’re getting ready to do your lesson and how to divert you into something else,” Danza revealed. “It’s frightening not only because your intellect is on display and you have this unbelievable responsibility, but can you really make an impression on them that will last?”

A guy like Tony Danza who has a camera watching his every move has two options: He either fails or succeeds and does it in front of the world. To ensure his success in teaching the kids of Philadelphia’s Northeast High School, Danza was reportedly tough but compassionate. What does that mean in teaching terms? Well, not too much homework but quality material when it was assigned.

Danza added, “I just kept pushing them and telling them they could do it and they did. It was amazing. It was one of the most successful things I’ve ever done.”