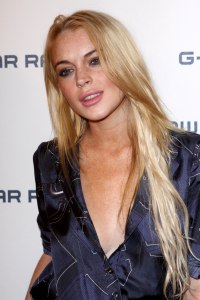 Lohan will reportedly stay at the treatment center in Rancho Mirage while awaiting her October 22 court hearing where she’ll learn her fate for violating conditions of her probation. Lindsay Lohan failed the parameters of her probation when she tested positive for one drug test and another was thrown out on technicalities.

We’re not sure whether or not the Better Ford Center will be the key to Lohan’s recovery, but we do know she was originally sent to jail last week by Los Angeles Superior Court Judge Elden S. Fox for the violation. The judge denied her bail but Lohan was later released on $300,000 bail after Judge Patricia M. Schnegg overturned Fox’s ruling.

A legal eagle close to Lohan told People that her latest stint in rehab could sway the sentence Judge Fox ultimately hands down “out of recognition that she really needs the help from professionals and great medical care to help rebuild her life.”

Lindsay Lohan isn’t the first celebrity name to walk the halls of the Betty Ford Center. The center was founded by former First Lady Betty Ford and Leonard Firestone in 1982, and boasts a famous client list including Keith Urban and Steven Tyler.

Lindsay Lohan’s father isn’t a fan of the Betty Ford Center and Michael Lohan wasted no time saying so to Access Hollywood.

“Now that word is out. Look at the ‘short’ list of people who went to Betty Ford. Most if not all relapsed. I went there myself and I will tell you. Betty Ford is a country club,” Michael Lohan told Access Hollywood.

“They administer prescription meds, and even put their patients on prescription meds. Once more, they don’t have family therapy at all. Conflict resolution and family therapy are a key component in recovery! Her turmoil and the root of her problems are her family. This will not work! Mark my words! It is however, comforting to know Lindsay is in a safe place and away from her enablers. Unfortunately, if BF gives her any prescription drugs, they become another enabler. Back to square one!”

Tell SheKnows if you think this latest round of rehab will work for Lindsay Lohan.