The Vampire Diaries’ sophomore season is moving full steam ahead, taking a bite out of fall TV and leaving viewers yearning for more.

On last week’s episode of The Vampire Diaries, Stefan was left to train our newest bloodsucker Caroline in her vampire ways, while Damon, Alaric and Elena road-tripped to investigate Isobel’s old research papers in hopes of coming closer to solving the mystery surrounding the Lockwood family. 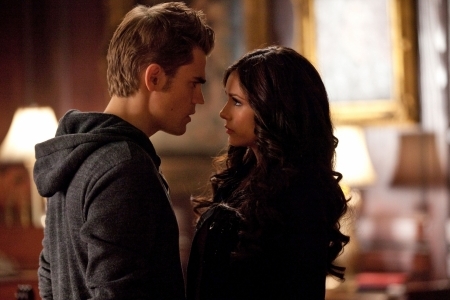 In the end, Elena gained some insight about her birth mother Isobel, Caroline realized just how dangerous she is to Matt and the Lockwood family secret revealed a full moon discovery of a werewolf in the form of Mason Lockwood.

Now that you’re all caught up on the hottest vampalicous guilty pleasure show, let’s see what the sulkers of The Vampire Diaries were up to this week on the episode titled Memory Lane.

Stefan (Paul Wesley) was more determined than ever to find out why Katherine (Nina Dobrev) showed her razor sharp fangs in Mystic Falls again and Damon (Ian Somerhalder) was eager to prove Mason (Taylor Kinney) was a werewolf.

KATHERINE AND STEFAN REMEMBER THE PAST

On edge about Katherine’s plans for the town of Mystic Falls, Stefan decided to pull a fast one on Elena’s doppelganger. He shot his former flame up with a dose of vervain and shackled her to the wall with promises of torture if she didn’t spill about why she was really there. Of course, she reasoned it was Stefan’s eternal love that brought her back and that she never compelled him. Katherine also revealed a few other hidden secrets from 1864 including George Lockwood was the guard who helped her escape death in the blazing church fire of 1864. In return for her freedom and faked death, Katherine gave George the mysterious moonstone Mason has been after. It was also revealed that George Lockwood used the knowledge of vampires to cover up the werewolves presence in the past. 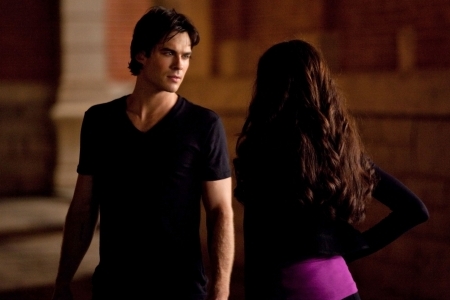 On the other end of the vampire chain, Damon (Ian Somerhalder) tried a new method in getting close to Mystic Falls’ resident werewolf, Mason (Taylor Kinney). Damon’s plan to get chummy with Mason at Jenna’s barbecue proved potentially deadly for the vampire. Damon tried to off his natural born enemy with the old silver knife in the pie trick but Mason wasn’t as easy to kill as Damon thought. Mason tried to call a truce with Damon and assured him that all he wants to do is take care of the Lockwood family. Damon wouldn’t back down and took another shot at the moon howler with some deadly silver but failed miserably — turns out silver is not the Achilles heel of a werewolf, it’s just a myth. Mason issued a warning that sounded like the brooding vamp should watch his back in the future as he’s now made an enemy.

In other supernatural news, Mason finally told Tyler he changes into a werewolf but the same fate won’t rest on Tyler because he won’t trigger the curse. We come to learn the curse is triggered when one kills a person.

Elena had enough of Jenna’s barbecue and accepted a ride to Stefan’s from Caroline. Turns out Caroline was doing Katherine’s dirty work and was supposed to keep Elena away from the Salvatore house but plans didn’t go the way they were supposed to have gone. Elena set off on foot to the house but not before getting told by Caroline her relationship was doomed because she was human and Stefan was not.

Meanwhile, Katherine was the one to deliver the final ultimatum of the evening with a surprise attack on Stefan. Kat has been sipping vervain all these years and has a tolerance for the vampire kryptonite. Katherine demanded Stefan break things off with Elena or she would kill everyone Elena loves and then deliver Stefan’s love her own slow death.

Elena showed up at the house taking Katherine and Stefan by surprise. Kat rendered Stefan helpless and headed up the stairs to meet her twin face to face. She eerily stared Elena down before disappearing into the night.

Stefan and Elena shared an embrace after he learned Elena met Katherine. The two have an awful fight in ear range of Damon and Caroline. Turns out the two staged the fight to make everyone think they’ve agreed to Katherine’s demands — this means making Damon, Caroline and Katherine believe the evil seductress has gotten what she wants.

Will the two keep the rouse up? Find out next week when The Vampire Diaries promises secrets will be revealed.