Heidi Montag and Spencer Pratt are back in the news (which is just how they like it) with her filing a motion for dismissal making their reconciliation official. Was Speidi’s divorce filing, along with the infamous sex tape, all a huge publicity stunt? 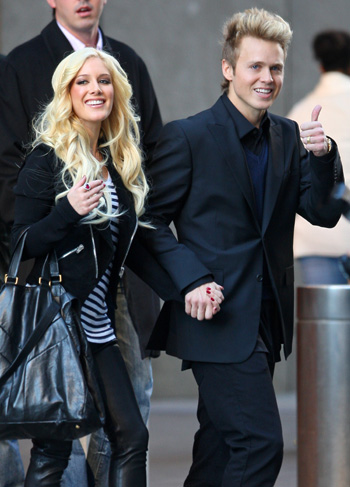 Heidi Montag officially is back on with her husband Spencer Pratt, after filing a motion for dismissal at L.A. County Superior Court. Heidi and Spencer (aka “Speidi”) are certainly making the most of their reality show 15 minutes of fame.

The dynamic duo met and, much to the dismay of many friends and family who disliked Pratt, got married on MTV’s The Hills. In August of 2010, Montag filed for divorce from Pratt, citing “irreconcilable differences.” What happened? I think Pratt may sum it up best:

“We love each other but I’m a fame whore and I’ll never grow out of it. [Heidi] knows that and doesn’t want that…There’s no way my love for fame and her love for puppies will ever work out successfully.”

Pratt suddenly announced he has a sex tape starring him, Heidi and a Playboy playmate Karissa Shannon and, of course, he wants to sell it. Heidi’s reaction?

“There is no sex tape that exists and there never was,” Montag told People magazine. “Spencer is trying to drum up press. This is exactly why I wanted to divorce him in the first place.”

Paparazzi then “catches” the couple canoodling in Costa Rica — and they don’t exactly act like they are in the midst of a divorce. It probably comes as little surprise that Heidi and Spencer are no longer divorcing.

Now that Heidi and Spencer have officially reconciled, do you think the couple really wanted to divorce — or was it all a publicity stunt? Weigh in below!