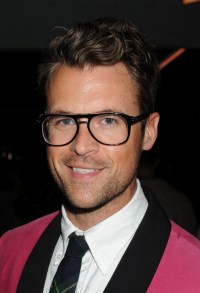 Every morning when I wake up and research the hottest Hollywood news I always say a small prayer and today my prayer has let me down.

I’ve always known one day I would have to report that Brad Goreski was leaving camp Zoe, but I never thought it would be this soon. I’ve only just begun to love Goreski’s freak-flying personal style and super-cool professional mind.

Well, Taylor went first (not of her own free will) and now Brad Goreski is leaving Rachel Zoe.

Goreski announced the news Wednesday that he would be stepping into his own style-light starting Friday.

“I love Rachel, and she’s taught me everything I know,” Brad Goreski told People. “But there’s a point where either I do it now, or I’ll never know what it’s like to spread my wings and soar.”

According to People, Goreski announced the news to Rachel Zoe a month ago. Reportedly there were tears shared and I’m sure they were tears dressed in the finest Chanel.

“We couldn’t stop hugging and we couldn’t stop crying,” Rachel Zoe reportedly said of receiving the news. “He did this with such class and elegance. And I get it. I just told him, ‘I’m here for you always.'”

“We have a relationship that’s not normal,” Zoe added. “I jump into bed with him and wake him up, and we have these pow-wows, and he’s like, ‘Wow, I haven’t brushed my teeth.'”

So, how does this major news bode for The Rachel Zoe Project? The lady with a passion for fashion all but indicated that the series would continue without him. “I don’t want to hire somebody for the purpose of the show, we just got lucky,” Zoe explained. “No one’s ever going to be Brad to me.”

A rep for Bravo is claiming the network has not decided if it would bring the show back for a fourth season.

Brad was to die for and seriously I’m dying a little inside knowing I won’t see his bow ties and short-shorts anymore.