Seth Rogen is engaged to his girlfriend of six years, Lauren Miller. The Rogen-Miller wedding should be some party! 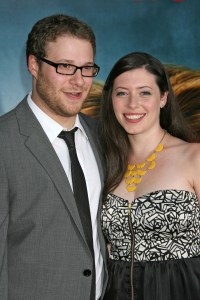 Seth Rogen popped the question after he and girlfriend Lauren Miller took a trip to visit family in Boston, according to Life & Style.

“He surprised her with the proposal,” a friend told the mag. “She’d started giving up hope that he would ever pop the question.”

Rogen and his girlfriend both trimmed down back in 2008, when he was preparing to go full-on action hero in The Green Lantern. Even after losing his own weight, he raved about his hot girlfriend.

“I have a girlfriend who is far prettier than I should have,” he told Coming Out.

No word yet on the when and where of the big event, but unless the two elope, it’s bound to be quite the star-studded and entertaining affair.

The writer, producer and big time star always seems to be releasing something on the mainstream and indie circuits. His next big budget effort is The Green Hornet, which also stars Cameron Diaz and is due out this January.

Assuming the engagement reports are true, SheKnows sends congrats to the couple.